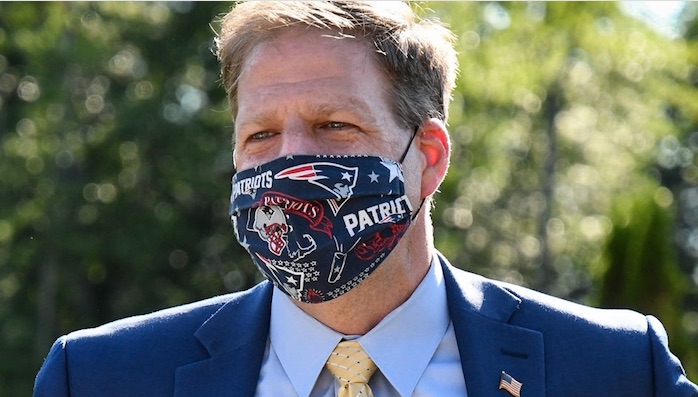 “As Granite Staters, we take pride in local control in our bottom up approach to education,” Gov. Chris Sununu wrote. “Similar to our fight to retain states’ rights against a bloated and ever-encroaching federal government, we have a responsibility to ensure the state minimizes its infringement on local control.”

New Hampshire Republican Gov. Chris Sununu has vetoed a proposal that would have banned state and local mask mandates in schools during public health emergencies.

The Republican-backed proposal, recently approved by the House and Senate, would block cities and towns from requiring students to wear a facial covering “for any purpose while on the school’s property unless the facial covering is necessary for a specific extracurricular or instructional purpose, or is required by some other section of the law.”

But Sununu vetoed the proposal on Friday, calling it a “big government” approach and suggesting that decisions about masking requirements were “best left to authorities closest to parents and families” through local elected governing boards.

In his veto message, he didn’t address whether he supported mask mandates but suggested that preventing local officials problems setting their restrictions would be overreach by the state government.

“As Granite Staters, we take pride in local control in our bottom up approach to education,” Sununu wrote. “Similar to our fight to retain states’ rights against a bloated and ever-encroaching federal government, we have a responsibility to ensure the state minimizes its infringement on local control.”

The measure was one of dozens of bills considered by the Republican-controlled Legislature seeking to restrict state and local government mandates related to the pandemic. Most haven’t won approval.

In New Hampshire, mask requirements have created disputes between officials who want to require face coverings and those, mostly conservatives, who say the measures are government overreach. Critics have staged protests outside Sununu’s Newfields home, which prompted him to make his 2021 inauguration speech virtual.

Supporters of the proposal to restrict schools from setting masking policies argued that the requirements weren’t necessary and smacked of government intrusion.

To be sure, Sununu is no fan of masking restrictions and has been critical of statewide policies requiring face coverings to prevent spread of COVID-19.

New Hampshire was one of the last states in the nation to set a masking policy after the pandemic began in early 2020. Sununu lifted the masking policy a year ago, declaring at the time that his administration “won’t limit or prevent the ability of private businesses and local cities and towns from requiring masks.”

The legislative proposal was strongly opposed by public health groups, health care unions and others which say it would prevent cities and towns, schools, hospitals and private employers from taking preventative measures to protect the public from COVID-19 and other highly infectious diseases.

A fiscal note attached to the bill said the restrictions, if enacted, would “likely invite legal challenges that will lead to litigation” which would likely increase the state’s costs.