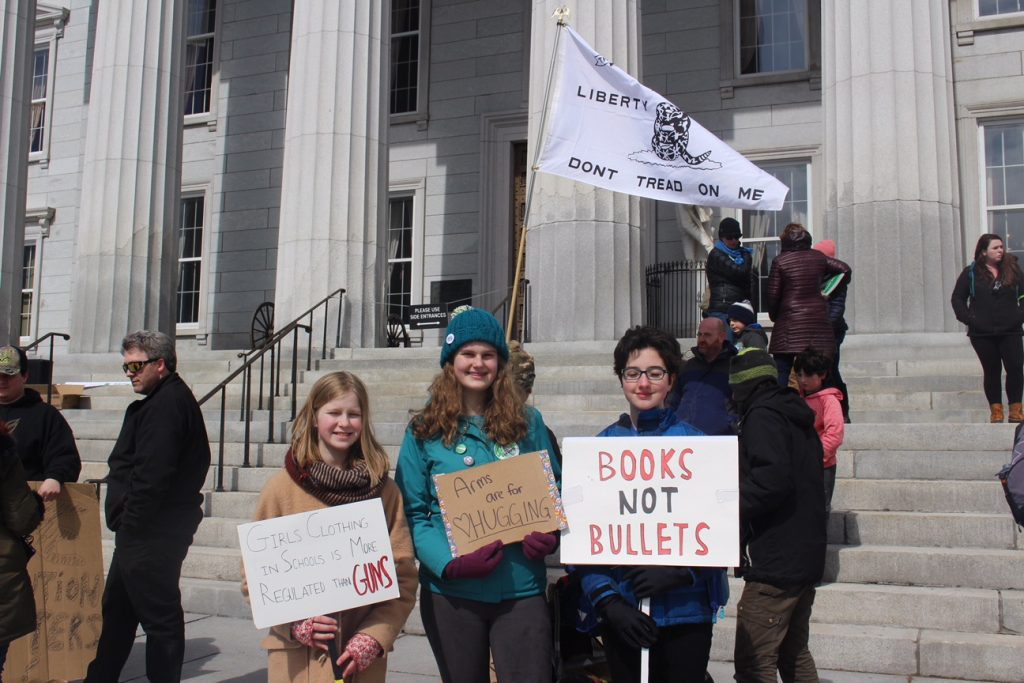 HUGS AND LIBERTY: Eighth grade Middlebury students (from left to right) Ella Landis, Anya HardyMittell and Saskia Gori-Montanelli participated in the March for Our Lives rally, which took place around the country on Saturday.

MONTPELIER, Vt. — A day after the Vermont House preliminarily passed legislation for universal background checks, gun magazine limits and increasing the gun purchase age to 21, about 2,000 students and activists gathered at the Statehouse to participate in a nationwide rally for gun control.

The March for Our Lives event, which took place in other cities across the nation Saturday, was organized by well-funded national and local liberal activists. Groups thanked for their support by Saturday’s speakers included Women’s March Vermont, Rights and Democracy, Gun Sense Vermont, the Peace and Justice Center, Planned Parenthood Northern New England, Justice for All, Outright Vermont, No Names for Justice, Ben and Jerry’s, Vermont Network Against Domestic and Sexual Violence, Black Lives Matter, and more.

One student speaker at the event was Burlington High School student Rivan Calderin, who lost a family member to a school shooting in Essex years ago.

“The number of victims increase and increase, but no one can remember all of their names,” he said. “We can no longer sit back and wait for the next tragedy to occur — we must put a stop to potential mass shootings because no one is safe from gun violence.”

Another student who spoke was Olivia Horton, a Vermont college student.

“I have come into this movement because my generation has endured adults taking no action,” she said. “I am deeply disturbed and upset that the adults in power have undermined and belittled the youth and their allies. Yes, I’m afraid, but no, I am not going to evade the problem at hand.”

She encouraged everyone to contact legislators and demand “common sense” gun legislation, a catchphrase of the national gun control movement.

Middle-schooler Anya Hardy-Mittell, a participant in the rally, told True North she was inspired to see young people speaking out.

“I thought all of the speakers were great and I was really inspired that most of them were youth,” she said.

Asked which legislation being proposed might be able to prevent a mass shooting, Hardy-Mittel said, “Well, I think definitely for school shootings, raising the age limit to 21, because a lot of the shooters have been within the ages of 18 to 21. And I also think that background checks are really important.”

Bill Loftus, a parent of one of the students in the crowd, told True North he thought gun control measures discussed by the speakers were “a move in the right direction.” However, he disagreed with having armed resource officers at schools to stop a mass shooting, despite its effectiveness in quickly ending a shooting at Great Hills High School in Maryland on Tuesday.

“I think it’s much more efficient to address gun violence from the front side,” he said. “If that’s the last recourse, I might consider that. … That’s not the message that I heard today.”

The crowd also had a number of visible opponents of gun control.

Kenneth Blodgett, of Lowell, was front and center in the crowd with a Gadsden flag, the “don’t tread on me” coiled rattlesnake banner of constitutional rights and liberty.

“I was asked to leave a few times and I wasn’t leaving,” he said. “Just because I’m here doesn’t mean I don’t agree with anything that they are saying. I just think it’s kind of patronizing the children to use them as the political movement.”

Blodgett referenced the foiled school shooting in Maryland this week as an example of Second Amendment gun rights working to protect school kids from mass shooters.

“The incident that just happened in Maryland was avoided with a firearm. He could have killed more people,” Blodgett said.

He added that in other nations around the world the ability to peaceably assemble and address grievances is not available, and so First Amendment free speech is as important as Second Amendment gun rights for Americans.

“The one that I think is most important right now is universal background checks,” she said. “Because that’s a huge thing, that’s definitely gonna pave the way for more gun legislation in Vermont.”

Asked if the checks might not work since many criminals are unlikely to volunteer for background checks, she said, “I definitely think it’s enforceable. We see that they work if you look at the statistics,” she said.

Commenting on the Maryland school shooting halted by an armed school resource officer, Knoop said this was not likely to be repeated often, and that the mere presence of guns leads to more violence.

“It’s great that they were able to stop him, but that’s not a common thing that happens,” she said. “And we know statistically that a gun in the presence of a home or other areas is more likely to increase the rate of homicides, suicides and other potential shootings.”