A few hundred of Vermont’s top education leaders met at Norwich University on Monday to discuss the direction of education amid a looming 9.4 cents property tax hike if the state maintains the status quo.

Addressing the group, Republican Gov. Phil Scott trained his focus on Vermont’s student-to-staff ratio, which is moving close to 3-to-1 as the student population in the state continues its slide to just above 76,000 pupils. 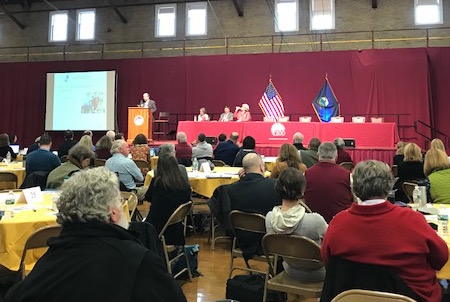 RIGHT-SIZING: The discussion at Norwich University on Monday dealt in part with efficiencies and costs as they pertain to class sizes and governance.

Scott wants to cut enough staff to change the ratio to 5-to-1, saving taxpayers about $100  million. New Hampshire and some other New England states have a 6-to-1 ratio of students to staff.

“I think understanding the fiscal situation we’re in and understanding what the challenges are, (with) everyone hearing the same data, is important,” Scott told True North between the sessions. “I continue to go to different forums where many don’t realize that we have a student population that is in decline and that we are spending more to educate fewer students,” he said.

“We could (achieve a 5-to-1 ratio) through attrition, and we just have to be realistic about where we stand,” he said. “Again, we are educating about 30,000 fewer students then we were 25 years ago and that’s our challenge.”

One of the themes Scott emphasized throughout the day was a “cradle to career” education system that focuses on aligning education with jobs in the workplace.

Administrators from different parts of the state appeared to get the message that cuts would be necessary to manage the $80 million deficit in the education fund, according to the governor.

“Gov. Phil Scott has used the words efficiency and restructuring quite a bit,” said Ellen Thompson, director of learning design for the Essex Westford School District Central Office. “I think it’s important for us to take a step back and ask ourselves what those words mean, and how in every other industry those mean having fewer people and fewer buildings.”

One of the afternoon panel discussions focused on how Act 46 enables some consolidation of teachers, workers and buildings. Each of the panelists was involved in a successful merger of school districts.

Diane Kirson-Glitman, a member of the Mount Mansfield Modified Union School Board, agreed that the ratio is becoming a concern.

“It always strikes me when I see the number of students we have in our district,” she said. “I remember that is the same number as in my high school when I was growing up.”

She said education leaders need to reassess what it means to have a small class size. “I feel like small is not always a number, it’s a state of mind,” she said.

John Alberghini, superintendent of the Chittenden East Supervisory Union, said that additional costs such as longtime substitutes can be better absorbed with the pooled resources of a merged district.

“You are able to adjust and manage those costs without growing a deficit,” he said. “In small schools what would happen is that boards would be faced with ‘what are we going to do?’”

Other speakers and panels discussed topics from test scores to college and career readiness. Heather Bouchey of the Agency of Education talked about the importance of preparation for postsecondary education