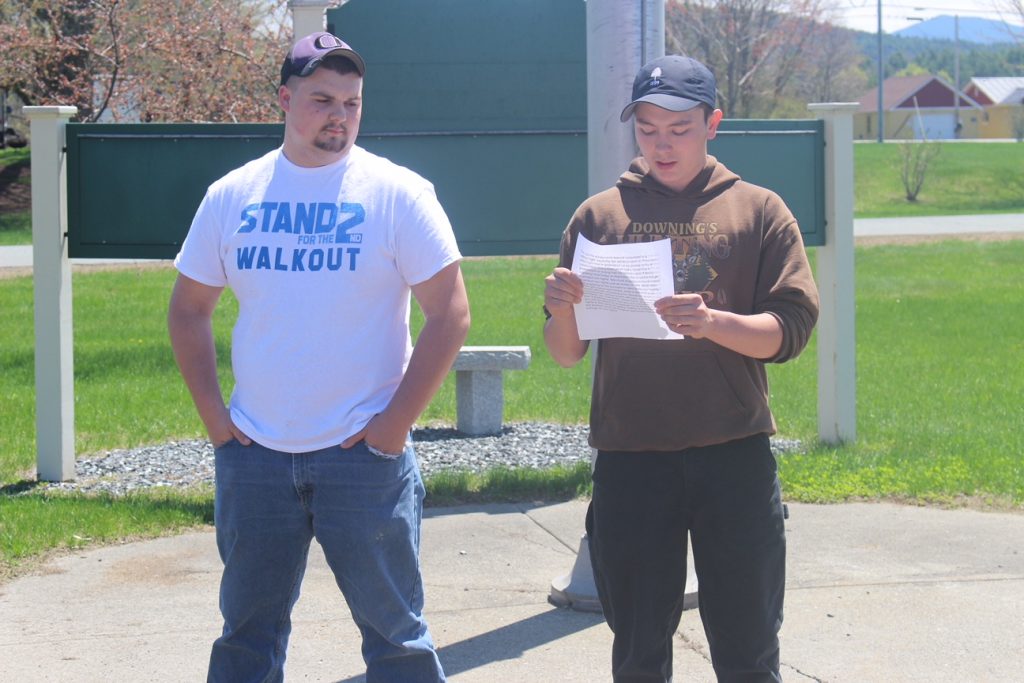 BRADFORD, Vt. — On May 3 across the nation, students walked out of schools in support of the Second Amendment. The demonstration was largely a grassroots effort, but few media outlets showed up to carry the students’ message: Guns are a constitutional right and must not be infringed.

It was a sharp contrast to the youth walkouts for gun control as tied to influential figures such as New York City’s former mayor Michael Bloomberg.

Although several schools participated throughout the state, Oxbow High School, located in Bradford, was the only Vermont school to register and be listed on the event’s official website. Oxbow held its event a week later, on May 7, to adapt to exam schedules.

On the national level, “Stand for the Second” was organized by high school senior Will Riley of New Mexico, who says the right to bear arms cannot be taken away.

“He decided that he needs to step up and start a walkout as a repeal against the other walkout that we had,” Oxbow senior Dylan Downing said in his speech delivered at the walkout.

A statement by Riley on the website states that he founded the movement by his own choice because he saw “the imminent threat for my generation’s future posed by the attack on our Second Amendment Rights.” 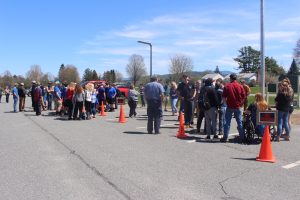 PROTEST: Students take a stand for their gun rights by walking out of class and gathering in the Oxbow High School parking lot.

In the Oxbow High School parking lot, Downing and senior Kodi Dyke conducted a press conference in front of about a hundred of their peers.

“We are students that are standing up for our rights and the Second Amendment,” Downing said. “We believe that the natural right for self-protection shall not be infringed simply because some individuals have used some firearms in the past for senseless attacks.

“We also believe that the topic of school safety should be addressed. There are many things that we can do to improve the safety of our schools without infringing on the rights of law-abiding citizens.”

He suggested better surveillance, more security guards and trained armed teachers are a ways to protect against attacks.

“Protecting our natural rights, which are protected by the Constitution, is just as important, and that’s the message we are trying to send today,” he said.

Dyke called for his peers to take action.

“We must engage in the process to protect our rights just as those on the other side are engaging to take them away,” he said. “When you leave here today, write a letter to your elected officials including your senators, congressman, school board and city council members. Call them, tweet them, post them on Facebook with your views.”

One of the few staff to come outside with students was Kevin Lawrence, a teacher from Newbury. He works at the River Bend Career and Technical Center, which is attached to the school. He said he was happy to see the kids demonstrate their rights through the walkout.

“I think it was great to see so many students turn out with heart-felt concerns for their future,” he said. “I don’t think it’s just one amendment that they are worried about, but they hate to see the erosion of the Second Amendment.”

He compared this movement to some of the recent youth rallies in Montpelier, which were organized against gun rights.

“One thing I think the media misses is, that was a Bloomberg-financed [rally]. All the infrastructure, permission, the money was in place to make that happen,” he said. “Whereas these students are just doing it because it comes out of their own heart and their own desires. There’s no infrastructure in place to promote them up to the governor’s desk.”

He and other students noted there was no loudspeaker announcement such as there was for the gun-control rally earlier this year.

While most of the students were rushed inside shortly after the speech was over, about a dozen students hung out to chat with True North.

Carissa Lasure, a sophomore, said she felt this was an important demonstration.

“I feel like if our voices aren’t heard then nothing is going to be done about it,” she said.

When asked if the school had been supportive of the walkout, she replied, “No, not the teachers at least.”

Gabe Gray, a senior, said he safely uses guns to hunt along with his family.

“I feel pretty good that my voice is being heard and being part of a movement,” he said.

However, senior Isaiah Shumway said he was asked to go back into the school early, but he declined out of a sense of fairness.

“They gave the other group walking out fifteen minutes, and I felt it was all right to have the same amount of time,” he said.