By Mike Gonzalez | The Daily Signal

This month marks the half-century of one of President Lyndon Johnson’s “Great Society” programs.

It’s not the War on Poverty, Medicaid or the Voting Rights Act. It’s public broadcasting. And it’s high time Congress stopped forcing taxpayers to subsidize it. 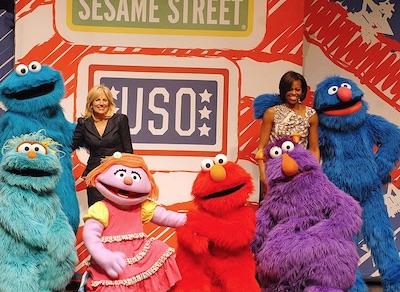 First Lady Michelle Obama and Dr. Jill Biden pose with some of the cast of Sesame Street during a “Joining Forces.

When Johnson signed the Public Broadcasting Act on Nov. 7, 1967, he spoke of a future in which non-commercial broadcasters would function as nationwide replicas of Ancient Greece’s “agora,” or marketplace.

But he added a dark warning: If mishandled, they could “generate controversy without understanding … mislead as well as teach.”

Conservatives quickly realized it was not going to be the agora.

PBS wasn’t yet a year old in 1971 when a 35-year-old White House lawyer warned President Richard Nixon that they were being “confronted with a long-range problem of significant social consequences—that is, the development of a government-funded broadcast system similar to the BBC.”

That lawyer was future Supreme Court Justice Antonin Scalia. As usual, he was right on the money. Since then, there have been efforts under every Republican administration except Gerald Ford’s to defund the Corporation for Public Broadcasting, the vehicle for funding PBS and NPR.

President Donald Trump’s experience is typical. His original 2018 budget would have ended federal grants for public broadcasting, but the budget Congress recently passed punts on the issue. It does not provide new funding for the Corporation for Public Broadcasting, but does allow for appropriations bills with advance appropriations for the Corporation for Public Broadcasting to move in the Senate.

That means the Corporation for Public Broadcasting will receive a nearly half-billion dollars in advance appropriation included in the fiscal year 2017 omnibus bill.

Republican presidents keep trying to stop taxpayer funding of the Corporation for Public Broadcasting for a simple reason: While PBS, NPR, Pacifica Radio, American Public Media, and all the other public broadcasters create what is unquestionably a quality product, that product skews to the left.

NPR and PBS insist they just report the news with no bias. And it is true that NPR, PBS, et al, do not broadcast government propaganda. (If they did, they wouldn’t be so hard on the Trump administration.)

What they do represent are the views of a particular group—those of the politically correct elite left—whose assumptions frame public affairs programming on public broadcasting.

This coalition is an updated version of the “managerial elite,” which the political theorist James Burnham warned would come to rule industrial societies. The views of this group almost always favor government control of or involvement in everything from health care to the environment to the media.

Many, if not most, journalists (not just taxpayer-funded ones) echo the opinions of the elites, whom they tend to use as sources. And because the national ones are based inside the Acela Corridor, they will reflect the liberal views prevalent in New York and Washington.

The difference here is taxpayer involvement.

These problems were well understood by both sides 50 years ago, when Congress held hearings on public broadcasting. Conservatives demanded no editorializing or even any type of public affairs programming.

Even the liberal godfather of public broadcasting, the legendary network veteran Fred Friendly—by this time working for the Ford Foundation—told a House hearing in 1967, “We must avoid at all costs any situation in which budgets of news and public-affairs programming would be appropriated or even approved by any branch of the federal government.”

Friendly’s point was that “public television should not have to stand the test of political popularity at any point in time. Its most precious right will be the right to rock the boat.” As he understood, with government appropriations comes accountability.

So why the persistent failure of all previous efforts to relieve the half of the country that votes conservative from paying for public broadcasters? As Scalia warned Nixon, defunding would be “politically difficult in view of … the generally favorable public image which [the Corporation for Public Broadcasting] has developed.”

The reason for that is that PBS, NPR, and the others hide behind their original educational remit. As George F. Will put it earlier this year, “Often the last, and sometimes the first, recourse of constituencies whose subsidies are in jeopardy is: ‘It’s for the children.’”

But NPR and PBS are not really for the children anymore, if they ever were, which is why conservative leaders must now find the intestinal fortitude to free Americans from the tax obligation to fund them.

Thomas Jefferson, who never heard a broadcast, was undoubtedly right when he observed that “to compel a man to furnish contributions of money for the propagations of opinions which he disbelieves and abhors, is sinful and tyrannical.”

One thought on “Stop forcing taxpayers to fund public broadcasting”