There is an editorial over at VTDigger from a pair of environmental stakeholders titled “Converting to Electricity is Common Sense.” The premise is that gasoline is never getting cheaper, and “Driving and heating homes and businesses are essential to Vermonters’ standard of living.” [So], “converting to electricity is common sense in need of government support.” 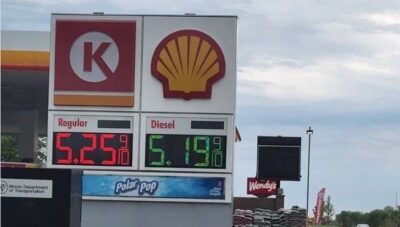 A photo from May 18, 2022, in the Chicago suburbs showing the price of a gallon of gas.

If the government got the hell out of the way, gasoline prices would be much lower. Energy, oil, and all fuels would be a fraction of their current cost. We know this to be true because that’s what happened during the Trump presidency and it could happen again.

But the authors, John McCormick and Louise Diamond say “sanctions on Russian oil are here to stay” — but before Biden, we had cheap gas and were not relying on Russian oil. Biden created that dependence through policy and then issued sanctions to cut off that supply, which looks a lot like more stepping stones on his path toward keeping his promise to end fossil fuel use in America.

The premise of your argument in favor of electricity is based on a lie.

But that’s hardly the only issue.

Converting it all to electricity isn’t like flipping on a light switch. You flick the switch and the light comes on because there is electricity on demand, the result of fossil fuel generation. The only green technology capable of replacing it is nuclear, and that’s not even on the table. And the not-so-green alternatives are incapable of meeting existing demand even if we covered the nation with them.

By embracing your common sense, the odds increase that flipping that switch does nothing (more often than not) on that grid to which you’d like to add thousands — sorry, millions — of electric vehicles. You know, to get rid of fossil fuel transportation.

[We’re facing] an exponential increase in demand with no supply and nothing acceptable in the green energy pipeline that could supply it for decades. It would make what the Left has done to increase the cost of gasoline look like amateur hour.

If, as you claim, driving or heating homes is essential to homes and businesses in Vermont (or anywhere else), the only sensible thing to do is to ignore John McCormick, Louise Diamond, and their Committee to Protect Next Generations.

The only thing they are protecting is a long list of lies.

9 thoughts on “Steve MacDonald: Converting to electricity is common sense? In what world?”