Editor’s note: The U.S. on Monday took a new, major step to leaving the Paris Agreement, a climate change deal between several countries. Secretary of State Mike Pompeo said, “As noted in his June 1, 2017 remarks, President [Donald] Trump made the decision to withdraw from the Paris Agreement because of the unfair economic burden imposed on American workers, businesses, and taxpayers by U.S. pledges made under the agreement. The United States has reduced all types of emissions, even as we grow our economy and ensure our citizens’ access to affordable energy. Our results speak for themselves: U.S. emissions of criteria air pollutants that impact human health and the environment declined by 74% between 1970 and 2018. U.S. net greenhouse gas emissions dropped 13% from 2005-2017, even as our economy grew over 19 percent.”

President Donald Trump is right to withdraw from the Paris Agreement. While the climate is indeed changing and human activity is playing a role, the chances of looming climate catastrophe are simply unrealistic and not grounded in reality.

But even granting such a looming catastrophe, the Paris Agreement itself would do little to alter the climate. To have any impact whatsoever on climate, the entire world would either have to quickly change the way it consumes energy or simply remain undeveloped. Both options are devoid of reality.

While many countries are rapidly expanding their use of renewable power, forecasts indicate that coal, oil, and natural gas will continue to provide the overwhelming majority of the world’s energy needs well into the future. For developing countries, the highest priorities are to reduce energy poverty and improve living standards. 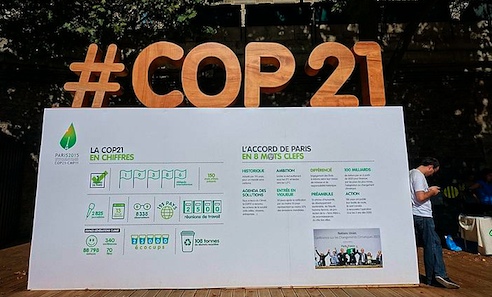 Global compliance with the Paris Agreement has been nothing short of abysmal. In fact, most nations will soon fail to meet the deadlines they agreed to.

Those who are clamoring for action on climate change are the ones who should actually be most upset with what a sham the Paris Agreement is. It’s been celebrated as a breakthrough achievement of the world’s developed and developing countries coming together, but it is anything but that.

With no enforcement mechanisms in place and no repercussions for failing to meet emissions reduction targets, countries are essentially free to do whatever they want, meaning they will continue on their business-as-usual trajectory without making any changes. China, for instance, can peak its emissions in 2030 even though projections have its peak emissions falling before that year.

Actually, India committed to emissions reductions that are less than what the country would achieve if it continues on the same track it is currently on today. In other words, it set the bar so low that it can continue along its businesses-as-usual trajectory of emissions intensity and come out looking like a climate hero.

As the Manhattan Institute’s Oren Cass wrote, “It’s easy to slim down to 180 pounds, if you weigh 175 to begin with.”

Pakistan was more honest than most about its emissions prospects, stating bluntly, “Given the future economic growth and associated growth in the energy sector, the peaking of emissions in Pakistan is expected to take place much beyond the year 2030. An exponential increase of [greenhouse gas] emissions for many decades is likely to occur before any decrease in emissions can be expected.”

Global compliance with the Paris Agreement has been nothing short of abysmal. In fact, most nations will soon fail to meet the deadlines they agreed to.

The original hope that each nation’s contribution might somehow push other countries to “do more” is not playing out. This deal was a hodgepodge of arbitrarily defined commitments with no enforcement mechanism. It was doomed from the start.

Following through with the Obama administration’s commitments would impose clear economic harm on the U.S. by driving energy prices higher—and that’s just a small part of the overall cost. Americans would pay more for food, health care, education, clothes, and every other good and service that requires energy.

These higher costs would be spread across the entire economy and would shrink overall economic growth and employment. Heritage Foundation analysts estimated that the regulations required to meet the Obama administration’s commitments would impose the following costs by 2035:

Other countries would continue getting a free pass under the agreement, but if the U.S. signed back on, one can be sure that environmental activist lawsuits would make sure the U.S. kept its obligations.

To make matters worse, the climate regulations encompassing the U.S. target may not even achieve the desired results and would require additional regulations. And that would just be the beginning. The Paris Agreement requires ever-increasing targets as time goes on, which would further increase the cost of compliance. These efforts would return us to the same costly and ineffective policies that the current administration is unwinding.

Congress should instead advance pragmatic policies that will actually drive innovation in energy and environmental protection.