New England grid power generation will grow more carbon-intensive due to the May 31 closure of Pilgrim Nuclear power station in Plymouth, Mass. Furthermore regional power costs, already the highest in the continental US, seem unlikely to decline. 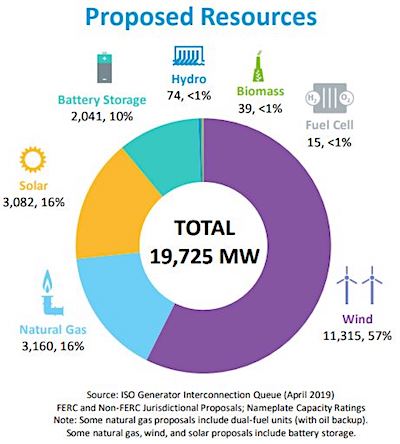 Grid planners say wind, solar and battery power comprise about 85% of planned future New England megawatts. This power is clean and emissions-free but is way more expensive than power now sold on the open market in New England — already the most expensive region for electricity consumers in the continental United States. Every New England state is among the top 10 most expensive. Consumers want to know: why is that?

The real cost driver isn’t the cost of the electricity itself — yet, anyway.

But that’s not the whole story. The work of transmitting that power cost consumers $2.2 billion (up 20%). Grid operators cite long-delayed improvements to enhance safety and reliability.

It gets worse. Closure of plants like Vermont Yankee and the opening of new “intermittent“ renewable power plants force regional grid operators to pay through the nose for “capacity charges.” In effect, consumers must pay power companies to keep generation available for emergency use. Like any convenience store product, capacity power is often unhealthy and always expensive. New England consumers paid $2.6 billion more in capacity charges between 2014 and 2018.

Utilities and state governments add on operating, tax and energy efficiency costs to that 9.5 cent/kilowatt-hour wholesale power price. Investment of those energy efficiency fees has driven peak power cost down. Still, the average Vermont consumer power rate is about 17 cents per kilowatt hour, compared to about 11 cents nationwide.

So when you wonder why Vermont and the rest of New England pay so much for electricity, don’t blame the power makers — the natural gas companies, anyway. Look at the middle men — the grid operators that must provide reliable power, utilities that must distribute the power and maintain the local power lines, and above all state governments that legislate for renewable power, energy efficiency, and taxes.