Never underestimate the influence of climate change author and activist Bill McKibben on the Vermont Legislature.

Case in point: Wednesday May 8, Sen. Jane Kitchel, D-Caledonia, was expressing her concern to the rest of the Senate Democratic Caucus about the fast-growing number of Vermont children in foster care. The reasons are uncertain — other states with worse opioid addiction crises aren’t seeing the same growth. A UVM-led  study will be completed in November. But here’s the reality: there are a lot more children in foster care than there used to be, and the state must pay for their care. 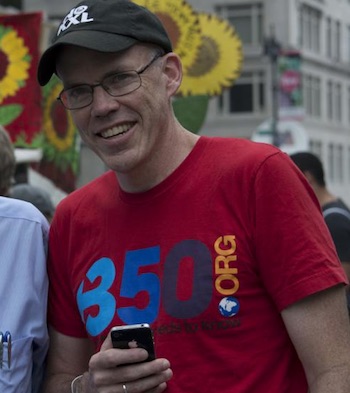 Sen. Alison Clarkson, D-Windsor, acknowledged the seriousness of the financial problem and added, “every line in our budget reflects our values. Bill McKibben’s speech [in Montpelier the night before] reinforces it. I would not give up on our existential threat.” Clearly Sen. Clarkson meant the threat of climate change, the main topic of McKibben’s talk at the Sierra Club-sponsored gathering at the Unitarian Church on Main Street.

Since the late 1980’s, the Ripton journalist, Middlebury College teacher, and founder of 350.org has been warning the world about climate change. Our Legislature has listened in rapt attention. Both houses of the Legislature gave the author of the global-warming classic “The End of Nature” lengthy, memorable standing ovations both before and after his January, 2013 special address at the Statehouse.

McKibben’s core message hasn’t changed, if his new book “Falter” is any guide: government must act now to prevent global environmental disaster later. The illustrations he uses are updated – he calls Pres. Trump a Koch-brother crony and blames the 2018 California forest fires on climate change – but as always he concludes that only aggressively mobilized government (he hopefully cites the Green New Deal) can stop the “creepy jungle” of neo-liberal, laissez-faire capitalism in which the fossil fuel industry thrives.

Clearly, many legislators agree. A House committee is rewriting Act 250 with an eye to reducing carbon emissions. H.439, the weatherization-through-fuel taxation bill, is a climate change bill, supporters said during House floor debate. (Update: the Senate has folded this bill into S.63, which would pay for increased weatherization through Efficiency Vermont fund balances, not an increased fuel tax.) Clarkson’s S.173, mitigation of climate change, and a companion bill in the House would give Agency of Natural Resources broad authority to evaluate virtually every decision of state government for its climate change impact. S66 would ban most new construction of natural gas pipelines and some other fossil fuel infrastructure. All of these bills could move forward, this year or next. And as Clarkson notes, the proposed budget does indeed reflect climate change values, including more funding for rail travel and EV charging stations.

McKibben’s critics fall mostly into two camps. One disputes the severity or even reality of climate change. The other concedes the problem but believes high-tech industry offers better longterm solutions than government preference for low-intensity energy generation. The latter wonder why McKibben continues to insist that what he calls the “miracle” of solar power — and maybe wind and hydro, but mostly solar, solar, solar — is the sole answer to the 21st century’s carbon-free energy needs.

As pro-nuclear climate change activist Michael Shellenberger notes, mid-20th century supporters of solar and wind power like German philosopher Martin Heidegger never thought renewables would make enough juice to power a first-world industrial economy. The looming collapse of Germany’s renewable power revolution is proving these predictions true, Shellenberger says. Meanwhile, he observes the obvious: people in developed First World economies like the warmth, mobility, food, healthy living and comfort that cheap power provides. People in the surging economies of India and China remember pre-industrial poverty and famine. They have had a taste of the Good Life and want more. Few people in any of these countries want to go backward.

There are ways to reduce carbon and continue to enjoy both affluence and freedom. Vermont has responsible, economically-sound climate change solutions beyond the McKibben paradigm. Our utilities can buy more hydro power from Canada. Our Legislature can encourage New England’s remaining nuclear power plants to stay open (Gov. Scott already has). We can sell carbon sequestration credits to California to ensure our carbon-eating forests are both economically and environmentally stable. We can acknowledge that New England cut its electricity-related carbon emissions in half this century when it chose natural gas over coal and oil.

In “Falter,” McKibben calls for a national mobilization of money and self-sacrifice similar to how our parents and grandparents fought World War II. A note of caution: Germany lost that war. By emulating them in the coming War to end all Climate Wars, we could lose, too.