Fourteen lawmakers want the Vermont Legislature to send President Donald Trump a message that “strongly criticizes” him “for his unacceptable behavior as President of the United States.”

The 14 sponsors of House Resolution 24 acknowledge it is “unprecedented” for the Legislature to “strongly criticize” a sitting president. 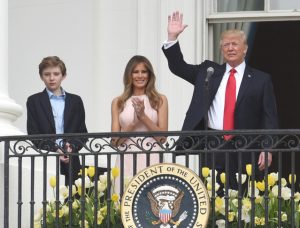 “He referred to Mexicans crossing the border as bringing crime and being rapists.”

Trump didn’t condemn Mexicans as an ethnic group, just the illegal behavior of some. According to the 2017 DEA Threat Assessment, Mexican drug cartels cultivate, produce, smuggle and distribute most of the heroin consumed in the United States. (Vermont gets much of its Mexican heroin via organized drug gangs in the Bronx.) Where organized drug crime and human smuggling exist, rape, prostitution human trafficking, and gun crime follow. Our Legislature could be fighting this problem. Early this year, the Rutland City legislative delegation sponsored a bill to help police fight drug-related prostitution and human trafficking. But that bill, H.733, has been ignored by the House Judiciary Committee.

The 14 also say that “Following the violent white supremacist and neo-Nazi-sponsored demonstration held in Charlottesville, Virginia in August 2017, President Trump’s immediate public comment blamed ‘many sides’ and lacked any specific condemnation of the far right organizations that sponsored the event … he attempted to establish a moral equivalency between the white supremacist groups that sponsored the rally and those who opposed it.” Others remember that President Trump downplayed ideology and condemned actual crimes regardless of which “side” committed them. Unlike the 14 and many in the press and elective office at the time, President Trump seemed most interested in protecting the constitutional, universal right to peaceful speech and assembly by punishing its abuses. And by the way  —  the Vermont Legislature continues to ignore ugly crowd violence within our own borders. Joint House Resolution 9 condemns the March 2, Middlebury College violent mob attack on controversial speaker Charles Murray and his host professor. The professor was sent to the hospital. The resolution sent to the House Education Committee  —  just like H733  —  has been ignored.

The 14 lawmakers also claim that, “although as President he denied that his proposed travel bans from predominately Muslim nations were in fact Muslim bans, they gave every appearance of attempting to achieve that objective.” Yet only six of the world’s 50 Muslim-dominant countries were targeted. All six (Somalia, Yemen, Libya, Syria, Iran, Sudan) had extensive terrorist networks and unstable or anti-American governments.

The 14 also say that “President Trump has consistently labeled stories from mainstream media as fake news, and even announced fake news awards, effectively questioning the role of a free press and First Amendment rights.” Just like you, me, and the 14 sponsors, President Trump is a free citizen of the United States. He can speak his mind about press antagonism, provided he does not use his elected power to impede its freedom. One could wish the same from California, where the state Legislature may soon ban advertising books and services espousing controversial “gay conversion.” Rather than object to our president’s free speech, perhaps the Vermont Legislature should caution its big sister on the Left, West Coast against not just “effectively questioning” but actually silencing “a free press and First Amendment rights.”

The 14 also decry “the Trump Administration’s policies that ignore science and undermine environmental protection.” If they’re talking about the Paris Climate Accords, perhaps the president doesn’t like how they restrict the United States  —  a net reducer in carbon emissions  —  while giving a pass to India and China, who make no secret of their plans to burn even more coal to power their increased growth in manufacturing and western-style consumerism.

Finally, the 14 say President Trump has undermined “the worldwide prestige of both his Office and the stature of the United States.” Yet his presidency has seen the defeat of ISIS, an apparent diplomatic breakthrough with North Korea, and a swift, effective, and acclaimed response to Syrian gas attacks.

Donald Trump is an easy target for our largely Blue State legislature. He’s not a perfect person or leader. And there’s nothing wrong with a Legislature admonishing a president. But the Vermont Legislature would do better to get its facts straight and tend its own social justice garden.