A school board member frustrated with Act 46 stood at the Berlin Town Meeting on Tuesday to deplore the unwelcome outcomes and suggest possible fixes concerning the controversial school merger law.

“I have fought the injustice of Act 46,” Berlin School Board member Carl Parton told the crowd of about 100 voters and observers in the local school gym. 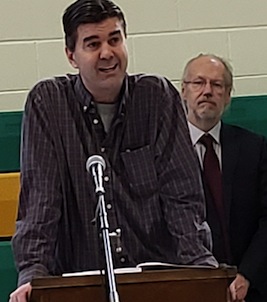 This Town Meeting may well be the last for the Berlin School Board, because Berlin is part of a forced merger of five town school districts. Yesterday, a Vermont judge refused a request to delay forced mergers, VT Digger reported. Parton’s town is lucky in one sense — the Berlin school is unlikely to close. Instead the building probably will be sold for $1 to the new merged district. And Berlin certainly will lose some oversight, community investment, and say in what will happen to and at the school, which is sited on land donated for the purpose, Parton said.

Parton urged people who share his concerns to contact their state senators to amend H.39, the school merger “repair” bill that cleared the House in February. It provides a moratorium for a relatively small number of school districts facing forced mergers. Parton favors a one-year moratorium for all school districts. An amendment to impose an across-the-board moratorium narrowly fell short Feb. 6 by just three votes.

Also, other towns may find a way to keep their schools, if that’s what they want. “One of the goals [of the state of Vermont through Act 46] is to close small schools,” Parton said. The audience gave him a brisk round of applause as he sat down.

Statehouse Headliners is intended primarily to educate, not advocate. It is e-mailed to an ever-growing list of interested Vermonters, public officials and media. Guy Page is affiliated with the Vermont Energy Partnership; the Vermont Alliance for Ethical Healthcare; and Physicians, Families and Friends for a Better Vermont

Images courtesy of town of Berlin and Guy Page