“The continuing recovery in home prices and recent strong equity market performance will bolster household wealth and along with continued low energy prices in 2018, should support robust consumer spending — which represents about 70% of the economy,” Kavet said in a report.

The low energy prices to which Kavet refers are mostly due to “fracked” natural gas and oil. Not all legislators like the low cost of heating oil, natural gas, and gasoline. Some say Vermonters need a carbon tax nudge to get them to buy more renewable energy. For example, in the Dec. 7 Valley News, Bradford Rep. Sarah Copeland-Hanzas backed the “Essex Plan” carbon tax, which (the Valley News says) “envisions adding 4 cents to the cost of a gallon of gas every year for eight years, eventually totaling 32 cents a gallon. 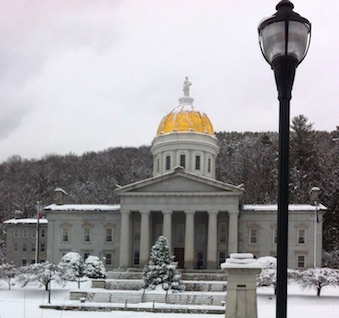 A newly proposed carbon tax would add 32 cents to a gallon of gasoline, 24 cents per gallon of propane, and 40 cents on diesel or home heating fuel over an eight-year period.

The fee would be 3 cents on a gallon of propane, and 5 cents for diesel or home heating fuel to start, escalating to 24 cents, and 40 cents, respectively over the eight-year ramp-up. The fee would be assessed to wholesalers, who could choose to pass that cost directly on to the consumer.” The Essex Plan would rebate some carbon tax revenue to electricity ratepayers.

Copeland-Hanzas hopes a carbon tax would help move Vermont closer to the goal of 90 percent total renewable energy by 2050. “We are kidding ourselves if we think that anything that we’re doing right now is moving us in that direction,” Ms. Copeland-Hanzas told the Valley News.

She has a point (although probably not in the way she means it): the pro-renewable Legislature has opposed carbon reduction in the past, and is poised to do it again. In 2010 the Vermont Senate voted against Vermont Yankee, Vermont’s largest-ever zero-emitting power plant. Now, some of the same senators who opposed zero-carbon Vermont Yankee are pushing to legalize energy-intensive marijuana cultivation.

Growing five pounds of pot indoors requires the same amount of electricity needed to power 24 Vermont homes for a year. That’s why marijuana cultivation in greater Denver, Colorado accounts for more than half of all new demand for power. Colorado and Pacific Northwest states are struggling to meet emissions reduction goals due to the huge energy demand of legalized marijuana cultivation.

Some observers believe the renewable power industry is pushing hard for carbon tax revenue because it fears losing federal subsidies, which are scheduled to be phased out.

· “Net metering” refers mostly to how Vermont subsidizes solar power at three to four times the cost of buying power on the open market. Thanks mostly to large-scale solar development (think acres of pasture, not rooftop), the load share of high-cost solar has grown enough to adversely impact rates. Solar capacity totaled 107 MW in 2015 and has continued to grow since then. New state policies partially restricting the sale of renewable carbon credits out-of-state is expected to impact ratepayers.

· “Transmission” refers in part to the cost of building and maintaining the 9,000 miles of New England’s high-voltage transmission power lines. ISO-New England budgeted $2.1 billion for 2017, an all-time high. Vermont will pay about $43 million more in regional transmission costs in 2018, according to GMP rate filing documents.

Bills released for introduction into Legislature:

Resolution to honor community activist who died per Act 39

A resolution to honor the life — and, apparently, the manner of death — of longtime civil rights, environmental and low-income activist Paij Wadley-Bailey will be introduced into the Vermont House of Representatives, sponsor Brian Cina (Burlington) said Thursday, Nov. 30. The resolution praises Ms. Wadley-Bailey’s long lifetime of civic, minority rights, and environmental activism — and also notes that she ended her life according to Act 39, Vermont’s assisted death law. Rep. Cina said he expects a vote in January. Ms. Wadley-Bailey died in August 2016 in Montpelier.

On Dec.12, the same day Kyle Midura of WCAX reported about a federal term limits initiative, Statehouse Headliners learned that a Congress term limits resolution will be introduced soon into the Vermont Legislature. Information on the national term limits movement can be found at www.termlimits.org.

A July 2017 Barna Group poll has identified Burlington as the fifth-most “post-Christian” city in the United States. Barna said 53 percent of Burlington residents can be labeled as “post-Christian” because they meet nine of 16 criteria of Christian identity, faith and practice. Portland, Maine, Boston, Albany, and Providence are ranked 1–4 nationally.

“Government and religion were not as separate at the beginning of Vermont’s history as they try to be today. Vermont was founded on Protestant Christian principles. State and legislative officials had to swear that they believed in one God, the Creator and Governor of the universe, the rewarder of the good and the punisher of the wicked. They also swore to acknowledge that the scriptures of the old and new testament were given by divine inspiration. And they had to own and profess the Protestant religion.”

“Marijuana X” documentary to be shown in Burlington, Richmond

The documentary film “Marijuana X” will be screened Tuesday, Dec. 19 at 6:30 pm in the Fletcher Room of the Fletcher Free Library on College Street in Burlington, and Wednesday December 20 at 7 pm in the Richmond Library Community Room. The screenings are open to the public, and donations will be accepted. “Marijuana X”, by filmmaker Michael DeLeon, describes the societal, public health, and economic difficulties created in the state of Colorado by legalization of marijuana. The 50-minute film features U.S. Congressman Patrick Kennedy, activist Will Jones III, and many others.