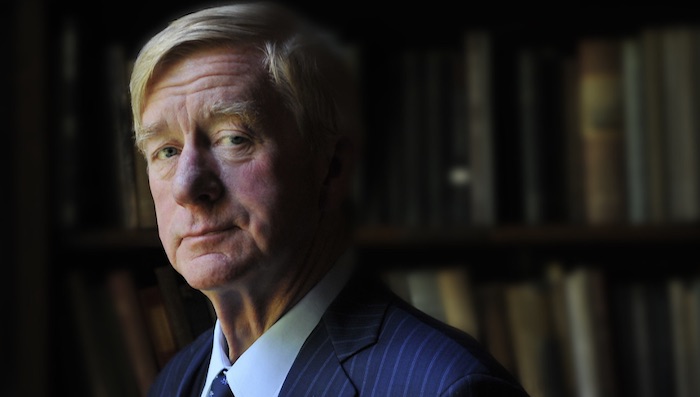 Bill Weld — the man who would beat Trump — sees Vermont as perhaps his second best chance to win a state in the 2020 Republican presidential primary, after his home state of Massachusetts. He’s also passionately in support of a national carbon tax and impeaching President Donald Trump.

In an email read at the dinner, former GOP legislator Matt Krauss describes Weld as “a tall, patrician kind of gent.” Looking distinguished in a gray flannel suit and Brooks Brothers tie, the Harvard-educated Weld took questions from reporters and fellow Republicans at the Washington County GOP monthly dinner at the Steak House in Berlin Thursday, October 17.

To call the former Massachusetts governor’s path to nomination an uphill battle is an understatement. Nationally Trump polls 80-95% support among Republicans, depending on the poll. In Vermont, however, a recent Vermont Water Cooler poll gave Trump 43% of Vermont Republicans, with Weld at 13% and former Rep. Joe Walsh at 6%. Despite the 3-1 lead for Trump over Weld, the large “don’t know“ and ”unsure” response offers Weld hope. He said he plans to campaign in Vermont often.

Weld said he thinks he can win states like Massachusetts, New Hampshire, Vermont, Wisconsin and California.

President Trump’s campaign slogan has been “Promises made, promises kept.” Headliners asked Weld what promises he would make to Vermont voters.

“My promises are to abolish the trillion dollar deficit and approve the Paris climate accords,” Weld said. The United States can meet its Paris commitments with just one firm measure, he said: “put a price on carbon, $40 a ton…..Congress could then repeal the federal gasoline tax and the diesel tax, with $150 billion left over.”

Weld said he eliminated the Massachusetts deficit within months of taking office.

Not all local Republicans were happy with Weld speaking at the county dinner. “There’s been some concern among the more conservative members whether we’re doing the right thing,” a county leader told the crowd of about 30 people. However, the committee has a longstanding policy of hearing serious primary candidates, even when the incumbent is a Republican, he said.

On Democratic frontrunner Sen. Elizabeth Warren, Weld said: “she will never get elected as long as she says that government creates jobs” by paving roads and operating schools. He added, “We’re not going to elect someone who says, like Green New Deal says, there’s a guaranteed income if they’re not willing to work.”

Weld cites four more criticisms of Trump: He’s not a financial conservative, because he has raised both spending and the deficit.

Trump goes after individuals,” he said. Attacking people is a bad use of the power of the presidency, he said.

He should be impeached because “he told national security people to lie … ‘You exist to serve me’ even if it does violence to rule of law.”

When asked about the Vermont and Washington trend to stricter gun laws, he said, “We can’t do nothing, with all the mass shootings. The best course to follow is red flag laws,” by which a family member or other person can ask a judge to intervene to prevent a mass shooting. The FBI needs more funding for dedicated investigation of likely mass killers, he said.