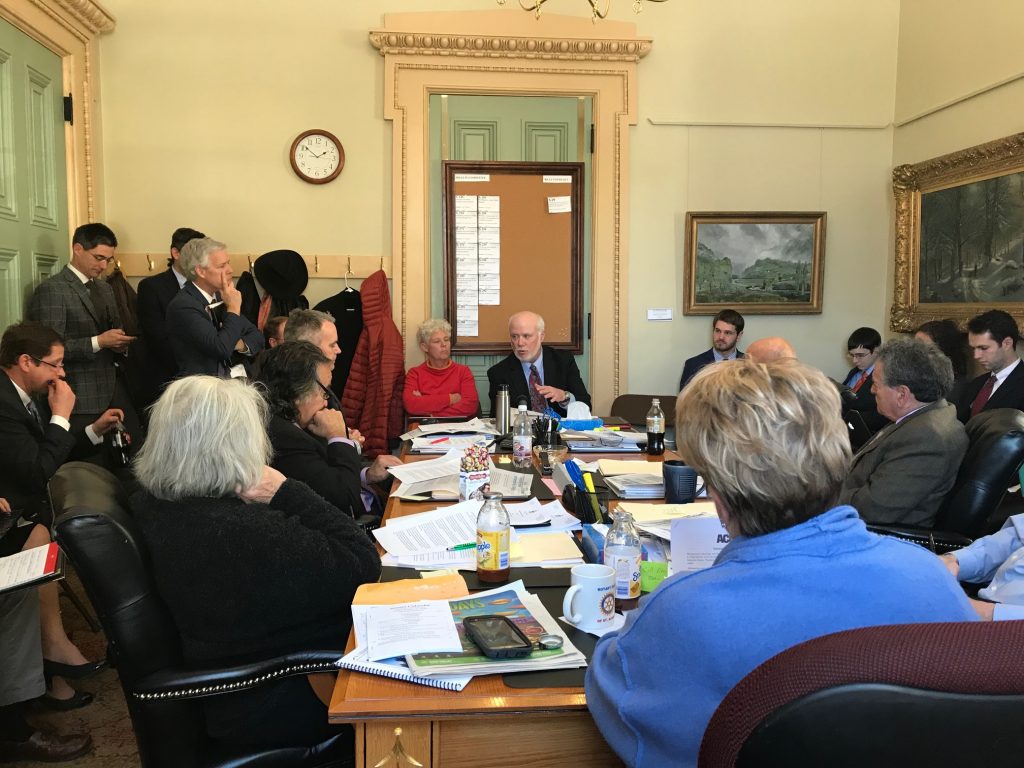 MONTPELIER — In December, the Federal Communications Commission led by Chairman Ajit Pai voted to rescind the Obama-era Internet regulation known as net neutrality. Last week, state lawmakers in the Senate Committee on Finance listened to testimonies for and against legislation to re-establish the regulation for Vermont.

Charles Storrow, a lobbyist for AT&T, made the case to committee members that the free market on its own prevents internet service providers from behaving badly with the levers of the internet.

Storrow emphasized how having ISPs reclassified as a “common carrier” under net neutrality is not OK.

Storrow said the switch was done because without such reclassification net neutrality would never have been possible. He explained the FCC does not have the same regulatory authority over information services as they do with a common carrier classification.

In the hearings leading up to 2015’s net neutrality vote, Storrow said, the FCC admitted that the abuses it was claiming to prevent were not an active concern.

“So that’s the thing — there’s no experience with this theoretical concern,” Storrow said. “Though in theory this could happen, companies don’t plan on doing that, and as I’ve said the market would punish them if they did.”

Storrow also made the argument that federal legislative action, not an FCC or a state action, should be the final solution for securing consumer rights on the internet.

The change envisioned for net neutrality by AT&T is that it would include giant internet content providers such as Google, Facebook and Twitter, the latter of which reportedly censors certain political viewpoints, according to employees of the company. Those content providers have been actively lobbying to enact net neutrality as proposed and implemented under President Barack Obama’s FCC.

“We should not in the least doubt that in the absence of a net neutrality rule, we will continue to see new charges for such things as home network connectivity, 4K video, or other new services as they become available,” Feld said.

He gave an example of how ISPs have “throttled” traffic in the past.

“The major broadband providers — Comcast, Charter, Verizon and AT&T — all proceeded to congest the traffic from Netflix, impacting not merely the Netflix traffic but all other traffic, effectively in some cases reducing broadband connectivity at peak hours to less than 0.5 megabits per second download, until Netflix agreed to pay an additional interconnection fee.”

Storrow, during his testimony to the committee, addressed some of these incidents. He said restriction of service for high-demand content providers such as Netflix is sometimes necessary “network management” when peak demand gets too intense.

But Feld suggested that allowing some clients to pay more money for better service ultimately tilts the playing field, and that the Obama-era regulation of the internet was necessary to ensure fairness.

“For the first time since we’ve entered the age of electronic media, it was at least possible for those without enormous resources to compete on a level playing field with those who had far more significant resources,” he said.

During the committee meeting, Sen. Michael Sirotkin, D-Chittenden, asked if the new status as a common career for ISPs had withstood a legal challenge. Feld said is had, and that the ISPs appealed this decision to the Federal Court of Appeals and the FCC’s decision was upheld in 2016.

Chad Marlow, advocacy and policy counsel for the American Civil Liberties Union, spoke to the committee by speakerphone on why Vermont lawmakers should support in-state net neutrality.

“The idea that ISP companies are now empowered to decide what information and ideas on the Internet receive preferential or disfavored treatment has outraged Americans from coast to coast,” he said.

“Should the Vermont legislature take action to protect net neutrality? It would join with 25 other states who have already either introduced or are on the verge of introducing net neutrality bills,” Marlow added.