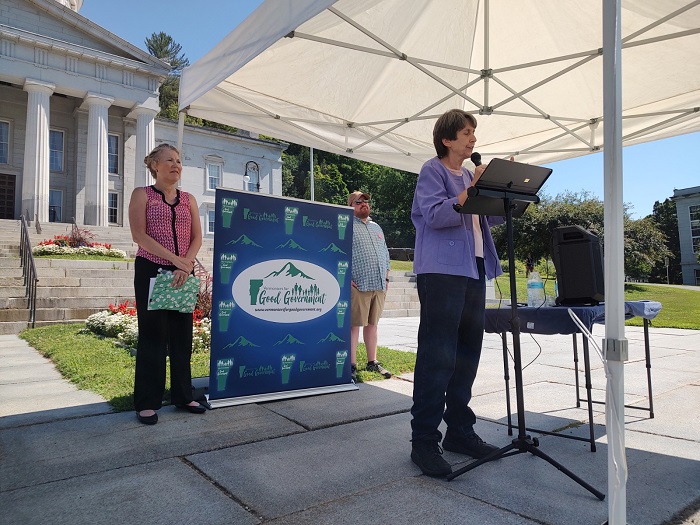 MONTPELIER — An event Saturday at the Vermont Statehouse drew at least 200 rallygoers and featured multiple speakers who said Proposal 5 goes far beyond what most Vermonters — including pro-choice residents — consider acceptable for the state’s abortion policy.

This November, voters will be faced with a decision about Proposal 5, a state constitutional amendment that would make abortion a constitutional right for all nine months of pregnancy.

Speakers at Saturday’s pro-life event called on moderate pro-choice Vermonters to join together to defeat the proposed constitutional amendment, calling it an extreme measure that goes well beyond the comfort level of even those who say they believe in a woman’s right to choose.

Anissa Lamberton, one of the speakers from Vermonters for Good Government, emphasized that Vermont’s current lack of abortion regulation is the exception when compared with other states and nations.

“Vermont has no current law protecting against pregnancy loss due to criminal abuse or activity, and under Prop 5/Article 22 no such law could be considered,” she said. “Fetal homicide laws and enhanced penalties exist in 36 states — yes, they should be here today. Vermont is an extreme outlier and Article 22 takes us beyond that limit.” 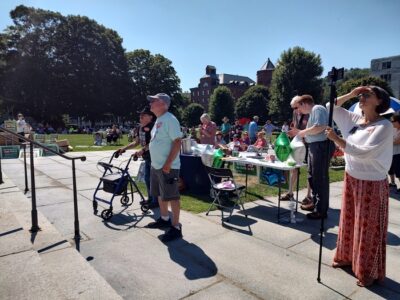 An audience of about 200 people listen to speeches regarding the impact Proposal 5 would have on Vermont’s abortion policy if enacted in November.

Lamberton said what’s permitted under Article 22 is not in line with the views of most pro-choice advocates, especially with regard to “late-term abortion.”

“Article 22 is the outlier here,” she said. “Article 22 is not good governance and doesn’t follow common sense for which Vermonters are known.”

Lamberton noted that the vast majority of women who get abortions do so within the early stages of pregnancy, demonstrating a recognition that late-term abortions are a poor decision. She suggested that pro-choice advocates who agree to strong limits on late-term abortions should join with pro-life advocates in defeating Article 22.

“[They] recognize, and exhibited through their actions, that Article 22, aborting Vermonters up to nine months of pregnancy for any reason, goes too far,” she said.

A top concern among opponents of Proposal 5 is that the measure, if ratified, would prevent Vermont from enacting any law to protect children at any stage of development.

State Rep Anne Donahue, R-Northfield, took the podium next, and focused on the serious nature of amending the Vermont Constitution.

“The lead sponsor of the Prop 5/Article 22 reproductive liberty amendment in the Vermont House, Representative Ann Pugh, said in a recent radio interview that the state constitution … ‘is where we state our most fundamental beliefs and values.’ She is precisely right.”

Donahue explained that Article 22 is different from the status quo abortion policy in Vermont.

“Article 22 is not what happens in Vermont today,” she said. “… The fundamental question is: do our fundamental beliefs and values support an unlimited right to an elective third-trimester abortion up until the time of birth, and locking that right into our constitution?”

Donahue dispelled any notion that the rest of the world is on board with local politicians’ latest proposal on abortion.

“Restrictions on late-term abortions on an elective basis is consent with broad worldwide consensus — almost every nation, including all European nations, limit abortion after 12 weeks and place major restrictions after 24 weeks,” she said.

Matthew Strong, also with Vermonters for Good Government, said poll data shows that most Vermonters are yet uninformed about even the existence of the proposal.

“When we took that poll, 61% of Vermonters had never heard of Article 22, and another nine [percent] weren’t sure if they had heard of it,” he said. “After passing in four votes in these chambers and making statewide and national headlines, 70 percent of Vermonters haven’t heard of it.”