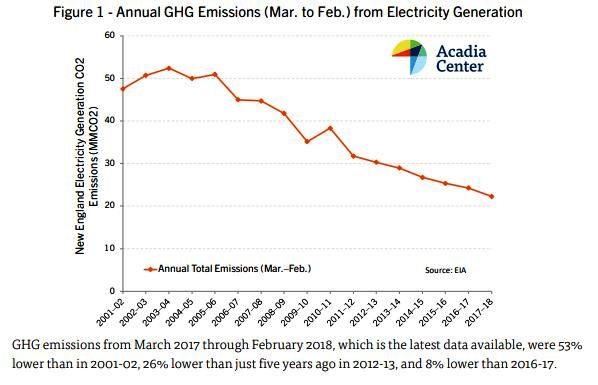 New England electricity greenhouse gas emissions have been cut about in half since 2000. The reason isn’t renewable power. And it isn’t nuclear power. The main reason is that a “cleaner” fossil fuel — natural gas — has largely replaced “dirty” oil and coal as the region’s mainstay source of power generation.

That’s the takeaway from a graph (above) provided by the Acadia Center of Providence, Rhode Island, and another graph (below) from ISO-New England, the region’s power grid operator. This might surprise Vermonters who would credit either carbon-free nuclear power or carbon-free wind/solar power. But both of these sources were more or less “flat” in output change between 2000-2018, as the graph shows. The big difference was that New England utilities swapped out coal and oil for cleaner and (thanks to hydro-fracking) far less expensive natural gas.

Gov. Phil Scott and other state officials have hoped the New England Clean Link power line, delivering Hydro Quebec power via underwater cable to Massachusetts, would generate revenue to help cover the federally-mandated cleanup of Lake Champlain. But the State of Massachusetts instead chose the more affordable Maine’s Clean Energy Connect over Vermont. Unlike the Clean Link, the Maine project lacked state permits. Like the Clean Link developers, the Maine power line builder has promised significant financial support for local governments, renewable energy projects, and other worthy causes. Maine’s governor and chief consumer advocate both have signed off on the project.

If built on schedule, the $1 billion Clean Energy Connect would deliver to Massachusetts twice the megawatts of the retiring Pilgrim nuclear power plant in Plymouth, MA. However, the Maine project may not be the last new transmission line from hydropower-rich Canada to New England. Plans to import natural gas into New England from gas-rich Pennsylvania and New York have stalled, and offshore wind at present comprises 60 percent of all proposed, unbuilt energy generation. As the region continues to choose low-carbon electricity over fossil fuels for transportation and heat, another power line from Canada may be necessary, experts at today’s ISO-NE Consumer Liaison Group meeting said.

Natural gas ‘blackout’? It can happen

Vermonters know about electricity blackouts, usually caused by high winds or heavy snow. But who thinks about a natural gas blackout? It happened this January in Newport, Rhode Island. Begun on Jan. 21 by either a valve failure or insufficient fuel supply — the fingerpointing continues and the exact cause is still undetermined — about 7,000 customers lost natural gas heat for about a week during the frigid end of January. The local utility, National Grid, as of Feb. 19 had paid out $360,000 in claims for lodging, meals and space heaters.

As reported by Seven Days, the Vermont House Energy and Technology Committee March 12 made the almost unprecedented decision to meet behind closed doors. The purpose: to receive an update on Vermont cybersecurity.

Like any Vermont press and interested citizens who may have wished to hear what the committee heard, citizen energy advocates across New England also have struggled to learn more about how well — or not — the region’s power grid is protected from cyberthreats. The explanation given makes sense: the more the ‘bad guys’ know, the more vulnerable the grid. On the other hand, Vermonters and other New Englanders want to know as much as possible about this important security issue.

One New England energy advocate at the ISO-NE CLG meeting compared asking utility and government officialdom about cybersecurity to encountering “a dense and impenetrable fog machine.”

ISO-NE does however try hard to keep New Englanders informed about electricity generation and transmission in general. You can sign up for ISO Express to get real-time energy prices in all six New England states, and the ISO-NE CLG twitter feed is a good source of current energy information.

2 thoughts on “State Headliners: NE greenhouse gas emissions from power down 50%, and the reason may surprise you”