As Virginia’s Nov. 2 elections approached, Big Labor-backed Democrat gubernatorial nominee and former Gov. Terry McAuliffe clearly knew his campaign was in trouble. After consistently leading his pro-Right to Work GOP opponent, Glenn Youngkin, in the polls for months, McAuliffe had suddenly fallen behind in late October.

And a wide array of political observers agreed McAuliffe’s single greatest liability was voters’ perception that, in all disputes pitting concerned parents and their kids against union bosses and union boss-backed school officials, the aspiring two-time governor would invariably side with Big Labor and its friends. 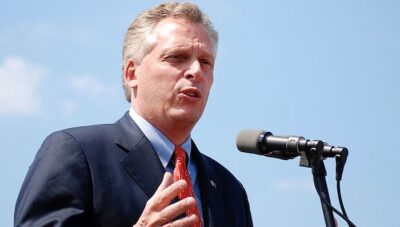 Former Virginia Gov. Terry McAuliffe has long been a friend of government union bigwigs like Randi Weingarten, the president of the mammoth American Federation of Teachers (AFT/AFL-CIO).

Probably preeminent in the minds of education-focused voters was how McAuliffe and other union-label Virginia Democrat politicians had recently colluded with teacher union bosses as they fought tooth and nail to block the reopening of public schools shuttered at the outset of the COVID-19 pandemic in March 2020.

Virginia schools offered fewer days of in-person learning than their counterparts in 43 other states during the 2020-21 academic year, when compelling scientific evidence was already available that COVID-19 posed less risk to the health of K-12 kids than does the seasonal flu and that schools are not significant vectors of COVID-19 transmission.  And standardized test scores in Virginia fell substantially during the school shutdowns that were unnecessarily prolonged by teacher union bosses and politicians aligned with them.

McAuliffe might have been able to avoid losing the support of many Virginia parents and other education-focused citizens who normally vote for Democrat candidates if he had tried, before the campaign was over, to distance himself from government union bigwigs like Randi Weingarten, the president of the mammoth American Federation of Teachers (AFT/AFL-CIO).

Instead, McAuliffe kept doubling down on his stance that Weingarten and the pro-union monopoly school boards she has in her pocket know better than parents do about how the public schools their children attend should operate.  He bluntly epitomized his position during the last debate of the campaign in Alexandria, Va., on Sept. 28: “I don’t believe parents should be telling schools what they should teach.”  At his election eve rally in Fairfax, Va., McAuliffe, despite the mounting evidence of Weingarten’s political toxicity, invited her and two other prominent union chiefs to speak on his behalf.

In the words of Trump Administration Education Sec. Betsy DeVos, this move “totally encapsulated” the idea that the election was a choice between “Youngkin for parents and students and McAuliffe for teacher unions and their checkbooks.”  Indeed, the McAuliffe campaign reportedly raked in a combined total of $7.5 million in cash alone from private-sector and government union bosses, plus millions and millions of dollars more in unreported “in-kind” Big Labor support in the form of get-out-the-vote drives, phone banks, etc.

Had McAuliffe been elected governor, he was openly prepared to work hand-in-hand with union-label legislators in Richmond to grant parents of Virginia’s K-12-aged children even less say over how public schools are run than they currently have.  In an August 26 press release, McAuliffe-bankrolling government union boss Lee Saunders spelled out his plans to rewrite Virginia law so that every teacher and other public-sector employee in the Old Dominion would be subject to union monopoly bargaining.

McAuliffe was fully on board.  In a videotaped April interview, he pledged he would “get collective [monopoly] bargaining done” as governor.  He also vowed to sign a bill repealing Virginia’s popular Right to Work law barring forced union dues as a job condition if it came to his desk.

By empowering government union bosses to speak for all front-line educators – and to codetermine with education officials who are accountable to voters how K-12 schools compensate and manage their employees — the mandatory monopoly-bargaining laws favored by Big Labor politicians like Terry McAuliffe diminish the voices of parents and other ordinary citizens.  In practice, they mean changes in education policy can’t happen over union officials’ opposition.  But they can and do happen without the consent of most parents.

Fortunately, because Virginians just selected Youngkin to be their chief executive and his fellow Right to Work supporter Winsome Sears to be lieutenant governor, and also apparently dethroned pro-union monopoly Del. Eileen Filler-Corn (Fairfax) from the House speakership, the Weingarten-Saunders agenda for the Old Dominion is unlikely to be realized in the near future.