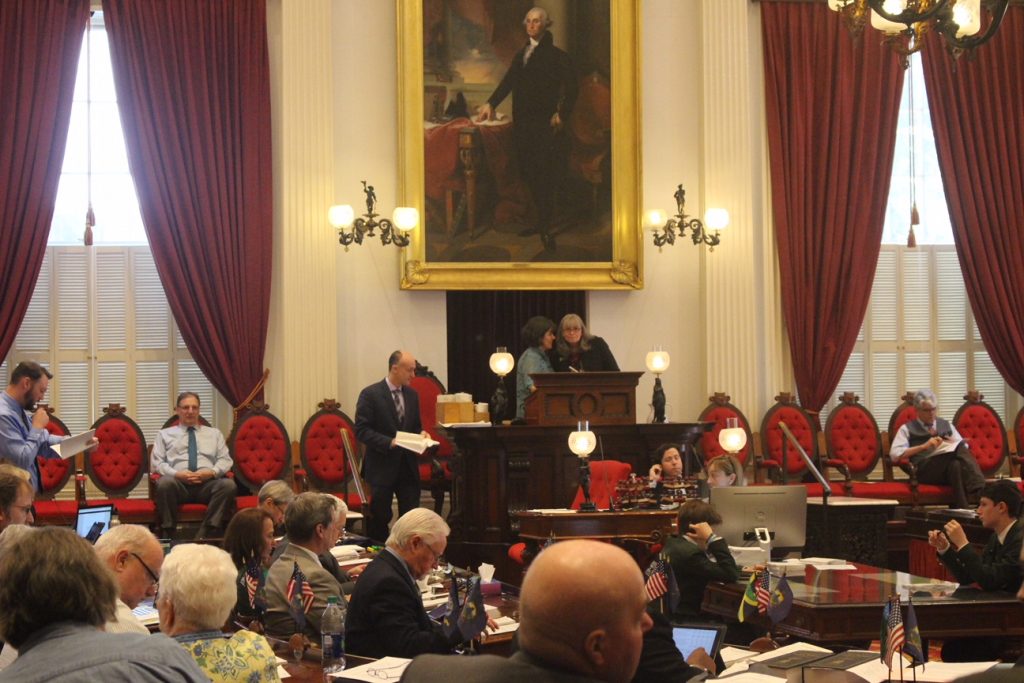 SPECIAL EDUCATION ON HOUSE FLOOR:  On Wednesday, the House was hustling through bills, including H.897, which deals with special education funding formulas for public and independent schools.

MONTPELIER, Vt. — The House on Wednesday voted unanimously to approve H.897, which reconfigures the current per-service funding formula for special education into a block-grant system. New language in the bill includes a four-year phase-in period for independent schools to adopt the new formula and begin taking more special education children.

“We believe that we have worked in concert with the Senate to produce an excellent way forward for us to overhaul how we deliver special education service to our children, across the state in a way that actually does a better job for children,” said Rep. Dave Sharpe, D-Bristol, chair of the House Education Committee. “And we believe we will save money in doing that.”

Sharpe said the first part of the bill was the arrangement for a special education funding study conducted by the University of Vermont, which found that compared to national average, Vermont is spending about twofold what most states pay to educate a special education student.

Thirteen supervisory unions in Vermont have participated in pilot programs to test the recommendations from the study. According to Sharpe, some schools have saved hundreds of thousands in spending.

The committee concluded that the one-size-fits-all block-grant approach needs some customization.

“We looked at poverty factors and clustering of special needs in certain districts and determined that it’s not really appropriate having the exact same census amount for every student across the state, that there is some variability that needs to be built in,” Sharpe said.

Sharpe noted that S.229, which was the work of the Senate Education Committee regarding special education requirements for independent schools, was rolled into H.897. He added the initial proposals in the bill may have placed too much burden on independent schools.

“We disagreed with that, and after working with and taking testimony from independent schools and special educators and others, we fashioned a different process.”

According to lobbyist Patti Komline, independent schools which currently don’t provide special education services will have to take those kids by 2022, under the approved legislation. Local education agencies — typically a group within a supervisory union — will work with independent schools to find the qualified personnel so that students can be accommodated.

In cases where no personnel exists, the LEA will identify another school for special needs students. Furthermore, the LEA and schools will not be able to be sued by anyone if there are no qualified individuals ready to fill the teaching positions.

The way the system works now, for an independent school to take special education students, the Agency of Education will approve them in certain categories.

“They have to apply for that, and it’s an onerous process right now and it takes a long time,” Komline said. “So they’ve got to figure out how to streamline that and make it so that these schools can do it more efficiently.”

She also said the bill streamlines the process for individuals to get qualified as special education teachers, a provision that could mitigate the current teacher shortage.

Mill Moore, executive director of the Vermont Independent Schools Association, noted the challenge of staffing special education teachers, especially for independent schools who haven’t done it in the past.

“There’s a shortage, especially for special educators for speech and language pathology,” he said.

He emphasized that for schools that don’t have any existing special education staff it will be especially difficult to get a qualified person in for maybe just a handful of hours per week.

“If the school doesn’t find a person, we don’t want its approval to be a risk,” he said.

He said the four-year window to adapt to the block-grant model is a welcome addition to the bill.

“It’s very appropriate,” he said. “We knew that this was going to take four or five years. It’s going to be complicated and difficult.”

He said working on this bill was a long and tough process and neither side seems completely happy with the outcome.

“In the end, we came to an agreement that satisfied us, the Vermont School Boards Association, and the Superintendents Association,” he said.