Several Vermont candidates and voters are expressing concerns about the influence socialist and fascist-like groups may be having on the state’s Democratic Party.

As seen on the web and social media, radical groups such as the Democratic Socialists of America and Antifa have active chapters in Vermont and are working to become part of the the body politic. Unlike mainstream political groups, these groups have shown a willingness to embrace aggressive protest tactics.

In Vermont over the past two years, some acts of political aggression have included a death threat sent to Republican House candidate Deserae Morin, the 2017 student protest against “Bell Curve” author Charles Murray at Middlebury College, and the sabotage of the Judge Brett Cavanaugh Supreme Court hearings by protesters from Vermont.

Such developments are troubling to Jack Williams, one of three Windsor County Republicans who will be on the ballot for state Senate in November. 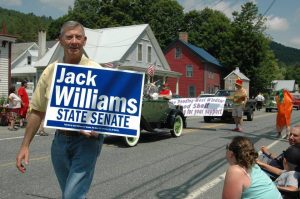 Senate candidate Jack Williams: “Many of us grew up in a time when stuff like this just didn’t happen in America; it took place in other countries.”

“Many of us grew up in a time when stuff like this just didn’t happen in America, it took place in other countries,” Williams told True North. “I know many naïve people have trouble accepting the reality of socialism in America today. We’re a good people, overall, in this country”

A Vietnam veteran and former U.S. Army Special Forces officer with past experience in the study of international leftist political groups, Williams is concerned about strident groups that go beyond civil protest to influence political outcomes.

Williams points to Antifa’s black costumes and face masks, which he said are designed to intimidate and foster fear in the general public just as the violent paramilitary SA Brownshirts did in the streets of 1930s Germany.

He also sees radicalism in mainstream groups that traditionally have been nonviolent but may now be embracing more aggressive tactics. 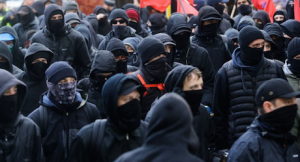 “Take Vermont as an example: We’re starting to see groups like the NAACP coming into Vermont in places like Rutland. Back in the 1960s it was a very good organization, but over time it has been co-opted by really radical people. … These and other organizations bear watching.”

H. Brooke Paige, a Republican candidate for secretary of state, was upset by the violent threat against Morin, of Colchester, who received a letter from someone claiming to be from the socialist political camp.

“The liberal left seems to be losing its grip on civility,” Paige said. “Deserae Morin is an outspoken advocate for conservatism including support for gun owners’ rights — this by no means should make her the target for classic terrorist threats in the form of notes composed using cut-up snippets from magazines and newspapers looking like 1960s ransom demands.

“The liberal left appear to have revealed themselves as the cowardly communists they actually are.”

Republicans like Williams and Paige aren’t the only ones worried about radicalism creeping into Vermont’s left-wing politics. Independent-minded voters, such as David LaPlante of Springfield, also are alarmed over what they see.

“The Democrat Party has been taken over by the Nasty Party,” LaPlante said. “All you have to do is listen to them for a couple of minutes. They have nothing good to say —  just nasty things about everybody who doesn’t see things their way.”

Ron Saunders, an independent voter from Windsor County, is concerned that young Vermonters are embracing socialism without any understanding of its connection to totalitarian regimes during the post-World War I era.

“A democratic socialist literally is what the Nazi Party was,” he said. “This is what happens when history isn’t taught in school.”

“We will be canvassing neighborhoods, knocking on doors, talking to voters, and handing out flyers as we work to elect Christine Hallquist as governor and re-elect Lt. Gov. David Zuckerman and Treasurer Beth Pearce,” Elise Greaves, Vermont RAD’s political engagement coordinator wrote in an Oct. 17 email letter to RAD members.

The group’s preferred candidates are those who campaign on universal health care, paid family leave, a $15 minimum wage, prekindergarten education and green energy, among other far left issues.

According to Greaves’ recent letter to activist RAD members, the group will be canvassing for the upcoming election in Addison, Chittenden, Franklin, and Rutland counties on Oct. 27.

While Williams suspects that out-of-state money is behind many radical groups in Vermont, local support is the key ingredient to help deliver the socialist agenda. Supporters of Rights & Democracy include everyone from Our Revolution to Montpelier’s Three Penny Taproom, according to this listing:

While Rights & Democracy has been transparent about its support of Vermont Democratic candidates this election cycle, the Democratic Socialists of America chapter in Burlington did not respond to TNR’s inquiry about its candidate endorsements.

However, in response to a question on the DSA national website asking if Democratic Socialists of America competes against the Democratic Party, the group offers the following response: “No, we are not a separate party. Like our friends and allies in the feminist, labor, civil rights, religious, and community organizing movements, many of us have been active in the Democratic Party. We work with those movements to strengthen the party’s left wing, represented by the Congressional Progressive Caucus.”

It adds: “We hope that at some point in the future, in coalition with our allies, an alternative national party will be viable. For now, we will continue to support progressives who have a real chance at winning elections, which usually means left-wing Democrats.”

An official at the DSA headquarters in New York City said the national headquarters is not active in the Green Mountain State at the present time.

“We have no endorsements in Vermont in this election cycle,” DSA’s Lawrence Dreyfuss told TNR.