Stratton Town Clerk Kent Young has apologized — sort of — for his Town Report essay urging newcomers to stop trying to make the tiny Windham County (population 216) town like where they came from.

But some social media readers think he did just fine.

“You came here from there, because you didn’t like there, and now you want to change here to be like there,” Young’s full page admonishment to newcomers (see above) to the popular ‘ski town’ begins. Printed on the cover of the Town Report, it quickly drew Twitter criticism from none other than Ellen Barry, the New York Times reporter covering the Slate Ridge/Pawlet conflict. Barry — who also has reported on the influx of out-of-staters due to the virus — has 44,000 Twitter followers. 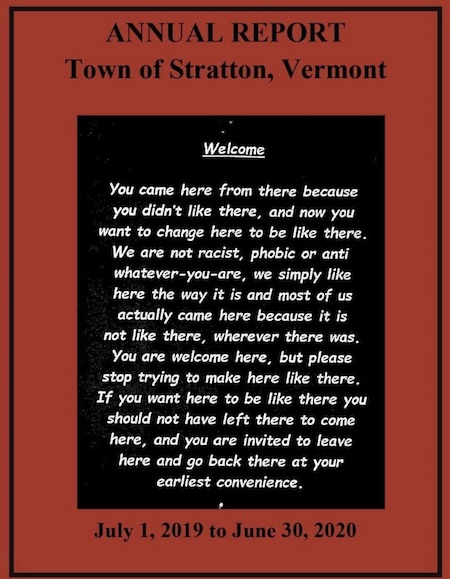 Not everyone found the essay enlightening and helpful. For example, VPO columnist and Michigan native John Walters said it is “just chock full of Vermont’s bloated sense of superiority that we all know and love.” So now the Town of Stratton website includes an apology — kinda — from Young, an Indiana native who moved to Vermont about 25 years ago.

“To all of you who have seen the Stratton Town Report cover of this year and found it to be offensive, I offer you my sincerest apology,” Young wrote. “It was intended to be a bit of shock humor, as explained in its description on the inside of the cover, to promote the preservation of a rural Vermont lifestyle. It was not an intent to offend anyone, but instead to share what I thought to be a cleverly worded letter which, although a bit harsh, was interpreted to say, ‘This is a great place to live, please don’t try to change it to be something it is not.’”

When VT Digger published its news story headlined “Stratton Town Report Cover draws attention for all the wrong reasons” on Facebook, the first five comments all wholeheartedly support Young. They include the following:

“Wow, well spoken from the heart, who cares what the people will say” — Bill S.

“I like it! Good for you. I have nothing against people coming to live here, but they should think long & hard before doing so. So many times after living here they will say they want their road paved, want a street light, want this want that…..” — Sharon A.

“There are many people from elsewhere that come and do good. They know VT isn’t just a postcard. But let’s not be naive. Others have come here to make areas of Vermont carbon copies of their former state. Worse, some even opine over Vermont hobbies, traditions and culture, with not just disdain, but a demand for it to cease. Native Vermonters aren’t just here for newcomers bidding. We are trying to live and enjoy life in VT too. If you don’t like hunting, or atvs…okay- but I might. And who are those that tell me I can’t? Yet those issues have become a big divide amongst natives and newcomers.” — Donna L.

Others stood up for the out-of-staters and their differences. And Laura G. added this statement: “Enjoying the irony of the town clerk being a flatlander too.”

It’s hard to find current data on the ratio of Vermont-born residents to Vermonters born elsewhere. But as with Vermont’s cows, so our native-born Vermonters: since 1960, their numbers are in decline. A corresponding growth in newcomers has not been without its problems, the Encyclopedia Brittanica reports:

“While emigration of young Vermonters has slowed, the influx of newcomers is outstripping the growth of the native-born population,” Encyclopedia Brittanica reports. “In 1960 more than three-fourths of Vermonters were native-born; by 2000 this proportion had dropped to about three-fifths. This decrease, coupled with perceived differences in the social expectations of nonnatives over the range and costs of government services, has led to some tension between native Vermonters and newer arrivals.”

That trend continued in the five years following 2000, according to World Population Review. The number of people who moved here (7,889) outnumbered by about 700 the number of births-minus-deaths (7148).

In the spirit of Young’s protest that “We are not racist, phobic, or anti-whatever-you-are,” Vermont Daily decided to learn more about the birthplaces of the 2021 Vermont Legislature, which this year is focused intently on repairing what it claims is Vermont’s historic systemic racism. Taking as a sample the first 37 lawmakers on an alphabetized-by-county list (see below) and studying legislative website biographies and other information available online, it was determined that:

Many lawmakers came to Vermont in the 1960’s and 70’s, drawn by the new Interstate, the skiing, the counter-culture life, and/or affordable real estate.  As newcomers they encountered some of the tensions expressed in Young’s statement. Time will tell if NYT reporter Barry’s out-of-staters who came to Vermont to ride out the 2020-21 pandemic will encounter the same conflict, and leave a similar mark.