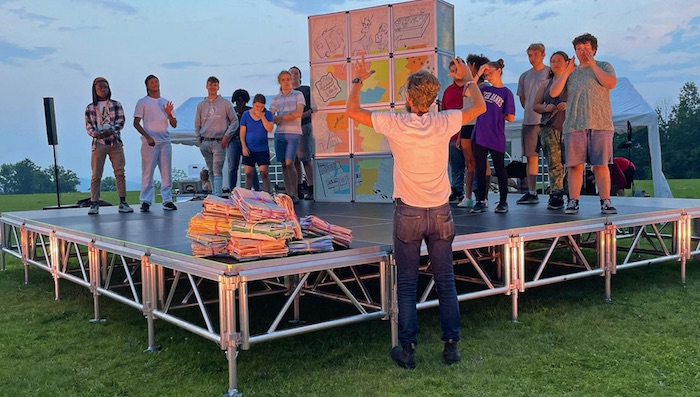 A SOCIAL JUSTICE MUSICAL: A musical-turned-movie is touring schools across Vermont and offers social justice messages, along with demands by teens on topics ranging from ‘land reparations to the Abenaki people’ to ‘easier access to gender affirmative medical care.’

A social justice musical called “Listen Up” — which has since been turned into a movie — is being shown at schools and other venues throughout Vermont in May and June. The teen-influenced project aims to address topics such as racism and bigotry, while setting forth a list of teen demands on climate change, LGBT issues, BIPOC affinity spaces, and more.

The creative concept behind The Listen Up Project was to produce a musical based on listening sessions, interviews, and workshops with more than 800 teens across the Green Mountain State.

In the musical production that resulted, local teens tell their own stories in songs and dance. The live musical toured the state in the summer of 2021, and Kingdom County Productions made a film out of one of the performances at the Shelburne Museum. The film version is now being shown throughout the state.

Recent screenings of the “Listen Up” movie have taken place at U-32 in Montpelier and the Cabot School. The schedule for the rest of May and June includes film screenings at Hunt Middle School in Burlington (May 24), Champlain Valley Union High School in Hinesburg (May 25), and Hartford High School in White River Junction (May 26).

“The streaming film version of the musical will be available for schools, youth centers, educators, parents and teens,” according to the “Listen Up Musical” website.

The production’s website also features a “Vermont teens list of demands,” which is characterized as “a list from VT teens of what they need in their lives and communities and how we can help.” It cites 29 demands, including one demand for “Easier access to hormones. Easier access to gender affirmative medical care.”

Another teen demand includes “BIPOC affinity spaces,” because “sometimes we just need to be around less white people.” According to the website, students also demand to “end climate change for the future of all of us” and to offer “land reparations for the Abenaki people.”

Vermont Department of Health, UVM Medical Center, Blue Cross Blue Shield of Vermont, the Governor’s Institute of Vermont, Front Porch Forum, and Burton are listed as sponsors of the project.

“I was absolutely blown away by the insights and wisdom of our youth, and the frank exploration of the lived experiences and emotional roller coaster ride called adolescence that Listen Up provided me,” Levine said. “Most importantly, the musical effectively catalyzes the important conversations teens, their parents, school mentors, and communities need to be having about the complex issues facing teens, society, and the planet today.”

A preview of the film version can be seen at the site’s home page. A banner displayed during the performance reads, “Just because I’m different doesn’t mean I’m dangerous.”

The musical was produced by Bess O’Brien, a documentary filmmaker and theatre producer, in collaboration with eight other musical supervisors, directors, choreographers, and communications specialists.

Scheduled screenings for The Listen Up Musical can be viewed online here.