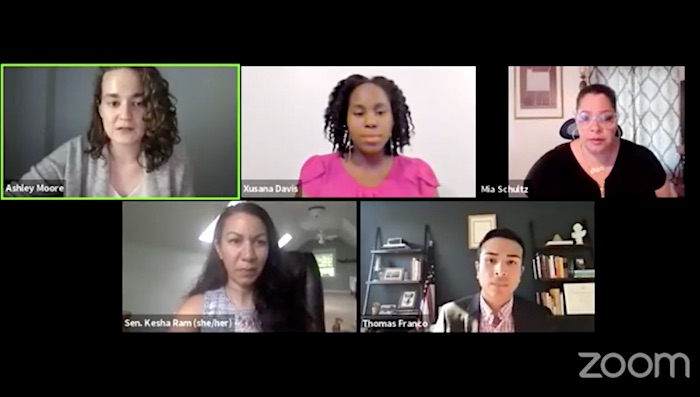 Four social justice leaders on Monday joined a meeting organized by Alliance for a Better Vermont to advance social justice causes, and the discussions included how to respond to the increasing pushback from Vermonters who don’t share their views on racism.

“Recently we’ve been seeing a lot of pushback to having critical race theory taught in schools,” Ashley Moore, of Alliance for a Better Vermont, said as she introduced four guest speakers to the Zoom forum.

According to Ram, the new social-justice-themed curriculum has sparked a debate over whether it’s right for classrooms.

“When speaking to the flare-up right now of people questioning and trying to understand what is critical race theory, how does it intersect with my kids’ learning experience, you know I keep pointing people to WCAX, where the reporter … essentially said something like ‘[CRT] is the idea that systemic racism and the history of slavery still impact every facet of society today.’ And I thought … there it is. You either agree with it or you don’t,” she said.

Schultz referenced the ongoing fight in Rutland over the Rutland High School use of the ‘Raiders’ mascot, and hinted that she will be attempting to introduce legislation that regulates how local schools select their mascots.

“I do have lots of big plans to bring legislation forth,” Schultz said. “We had a little bit of a mascot problem here, so that’s been on the top of the list here to try to introduce some legislation to eliminate that problem.”

“They [people of color] saw that if you were going to stay here, you had to fit a really specific mold to be treated humanely,” she said. “And so we have a history, that is still repeating itself, of driving out hyper-visible black and brown people in the state, unfortunately.”

Franco shared that he does not consider Rutland to be inclusive toward minority groups.

“You know Rutland does not necessarily have the best reputation when it comes to things like this,” he said. “So as I came here, and you had mentioned some of the work, the Declaration of Inclusion, for instance, you know we are at a very critical moment where a lot of folks do have things like this on their mind.”

“There are a lot of loud voices in the room that are getting a lot of attention that are not seeking to understand,” he said.

Davis said people of color largely have a distrust of public health institutions due to incidents in history, such as the Tuskegee experiments involving giving syphilis to black men in the 1930s.

“There’s been a lot more recognition and acknowledgment that these are urgent issues for impacted populations in the state,” she said. “I just hope it doesn’t take the exploitation of black pain and consuming videos of black men being killed, or having a president like Donald Trump, for us to have these realizations.”