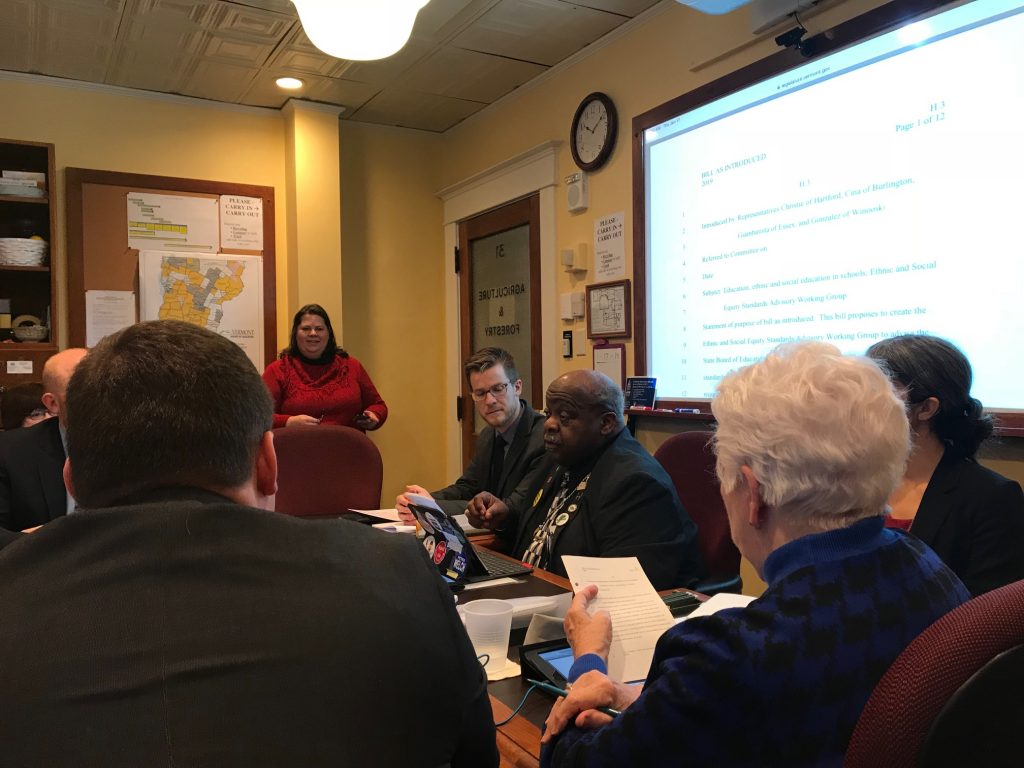 MONTPELIER — The House Education Committee on Thursday voted in favor of creating a work group to recommend new academic standards that recognize the history and contributions of ethnic and social groups and movements.

The bill, H.3, aims to reform how social and ethnic issues are dealt with in the classroom. Students as young as pre-kindergaren age could see their learning experience modified according to this bill.

According to the bill language, H.3 would “create the Ethnic and Social Equity Standards Advisory Working Group to advise the State Board of Education on the adoption of ethnic and social equity studies standards into statewide educational standards.” It also would require the board to publish data on student hazing, harassment and bullying incidents aimed at racial and ethnic groups, and other minorities.

The bill is similar to last session’s H.794, whose lead sponsor was former Rep. Kiah Morris, D-Bennington. That bill stalled in committee.

Christie, who is an African-American state representatives, explained why he thinks the bill is necessary.

“People say, ‘Don’t we kind of already do that on a day-to-day basis?'” he said, speaking of discussions on racism and equality.

“Well no we don’t,” he said, answering the question. “I’ve asked the question to folks, ‘What happened in 1921 in Tulsa Oklahoma?’ And 99 percent of the time, people can’t answer that question.”

He went on to explain that 300 people were killed during the Tulsa race riot, which was initiated by an attack by white supremacists. He shared the story to emphasize that certain aspects of American history are not taught well enough, or at all.

He offered other examples of history overlooked in many of today’s classrooms.

“I never realized this myself, but a third of all the cowboys were African Americans,” he said. “I didn’t know that.”

Christie, who was a technical education teacher in the 1980s and ’90s, said he takes pride in promoting a positive climate in the classroom.

Although not specifically mentioned in the bill, Gonzalez recommended creating a curriculum using material and policy recommendations by the left-wing Southern Poverty Law Center and Anti-Defamation League.

The SPLC, in particular, has received criticism in recent years for opposing conservative groups and free speech under the guise of exposing “hate groups.”

Stella Morabito, writing for The Federalist in 2017, listed 12 ways that, in her view, the SPLC “is a scam to profit from hate-mongering.”

“The SPLC is no doubt heavily invested in the campus anti-speech movement,” she wrote. “It stands to reason that to control ‘hate speech,’ one must control all speech. That’s a major reason any speaker on a college campus who is unapproved by the SPLC can end up shut down in riotous fashion as Murray at Middlebury or Milo Yiannopoulos at Cal Berkeley or Gavin McInnes at New York University.”

Christie told True North that First Amendment free speech must always be protected, even when it comes to the goals of H.3.

He added that the recent decision by Vermont Attorney General TJ Donovan not to prosecute verbal harassment against Kiah Morris is, in his perspective, proof that free speech is as well-protected now as ever.

How a social justice curriculum for schools would be created is unclear in the bill. The State Board of Education, while it may adopt standards, does not write curricula.