I grew up in a small neighborhood in Graniteville. My mom worked all the time, and in the summer as a kid I was either at camp, out of state with family or hanging out with neighborhood friends. We stalked the block, plucking dandelions from the grass, making forts out of downed tree limbs, or telling ghost stories about the woods beyond our house. A feeling permeated the summer in Vermont. It was like the world opened up — there was so much to explore and discover. The colors popped green and gold in the farm fields behind the house. The mountains rolled in shades of blue in a vista that included the Booth Brothers Farm and Camel’s Hump.

Summer meant two things to me: eating good food and being outside. It meant sneaking off to the playground with my friends and combining change so we could buy popsicles and candy from the general store. It was being too crowded between swimmers at the Montpelier pool, accidentally sucking in pool water on dives, and maybe getting chips at the food stand. 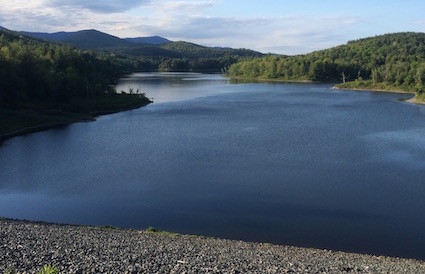 Vermont in the summer is unique. I know because I’ve spent many of my summers elsewhere. In Louisiana, I loved the willow trees, the red earth, and the periodic storms that rolled through, sending weeds tumbling across the roads. But down there it was too hot to be outside. The air didn’t smell the same — I missed that crisp pine scent that came in from the mountains. In the Florida Keys, summers meant being inside, avoiding the cancerous rays of the sun. In New Jersey, the summer months meant everything outside stunk of garbage and exhaust.

There was some summer energy in Vermont that wilted in the heat further south. After spending time elsewhere, the core of me kept going back to what I knew — the cool mornings, dew on the grass, the promise of a friendly smile from a neighbor. As a child, cashiers at small, locally owned businesses practiced their patience with me as I learned how to count money and add sums. I often visited the Graniteville Store near where I lived. I perused their newspapers and drooled over their hot food (which I never had enough money for). The store mirrored the town — soft, slow moving, independent, community focused.

As an adult, summer for me is now rooted in community. My part-time job is in the food service industry, and I see the swell of people — they’re louder, happier and sunnier once winter rolls away. Vermont summers are prime examples of the community-building that makes our state strong, and I believe small businesses are at the heart of this.

People have always sought out places to congregate. The unique thing about Vermont is that most of these places are locally owned, many for generations. The people that run them know everyone. They are fixtures in their communities and, like my memories of summers here as a child, they provide an authentic Vermont experience for residents and tourists alike.

At the Warren Store on Saturdays, they pull the grill to the front of the store and whip up hot dogs and burgers. At the Benson Village Store you get can real Philly cheesesteaks with Amoroso rolls and high quality ribeye steak. Pump and Pantry has some of the best maple creemees in the state, and if you buy a piece of pizza at Dan and Whit’s on Wednesdays, they’ll donate a dollar to a local charity. If you’re feeling down, visit DeBanville’s to pet Sadie, the golden retriever greeter who was recently mentioned in VPR’s Morning Edition. Everywhere you go, Vermont stores are personalizing summer and making it a unique experience for us all.

This is my first summer back in the state since I was a teenager, and I’m excited to see what it will bring. Lots has changed — many businesses have closed their doors. Some I knew and loved are no longer there.

It feels like I’ve changed a lot, too. I’m older now. I don’t spend as much time with friends, and it seems like I’m always broke and working. Some of the magic summer held as a child has been smothered by bills and responsibilities, a feeling of tension I think grips every person my age — what are we doing with our lives? Our futures? It’s easy to get caught up in benchmarks of where we should be, and what hasn’t gone the way we wanted.

But with all that’s changed, certain things remain the same. That bite in the air early in summer mornings still gets to me. I still love watching the early light filter through the spires and tops of the buildings in Montpelier. The Graniteville Store is still around. It sits just beyond a dip in the road that leads to Williamstown. The playground where I played is still there, too. The swing set has been replaced and the basketball court has been repaved. Sometimes when I pass by it, I think about how things used to be, and life seems open and endless again like it was when I was a kid, even if just for a moment.

This commentary is by Chelsea Catherine, of Montpelier.