For 55 years Shelburne Highway Superintendent Paul Goodrich has worked for the town highway department to keep town streets in great condition for the community.

He started when he was just 16 years old and isn’t looking to stop anytime soon — and the town appears happy about that. 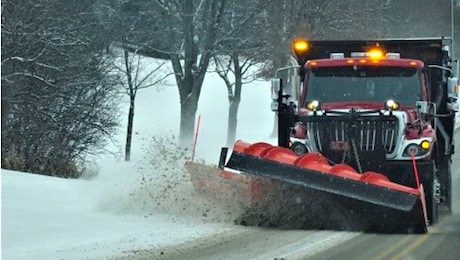 But every day in the winter, Goodrich gets up at 3 or 4 a.m. to check conditions, and if the streets need to be plowed, he tries to be out there on the first shift.

Shelburne officials held a celebration Aug. 11 to thank Goodrich for his service over the years and name the town garage in his honor. Friends, family and community members filled town hall to congratulate him, and later a parade of trucks and plows drove by, honking for Goodrich as he watched from the steps amid cheers and applause.

He got a few welcome surprises, too: a road sign reading “Paul’s Way” for him to take home, along with the selectboard’s announcement that the town garage would officially be christened Goodrich’s Garage.

Attendees recounted growing up with Goodrich and knowing his family all their lives. Rick Bessette, who grew up in Shelburne alongside the highway superintendent and his brother, called the Goodriches a family of hard workers.

“When he retires — if he retires — they’re going to have a hard time finding someone to replace him,” Bessette said.

But Goodrich said he has no plans to leave anytime soon.

“I like working with the people, and I’m pretty well supported,” he said. “Some towns don’t support their guys.”

That support from Shelburne officials and residents is a big bonus to his job. Another perk? Getting to do something different every day.

During the summer he walks along the roads for miles, checking to see if anything needs to be fixed. In the winter he’s up on the plow, clearing snow and making roads safe.

Many in the town know Goodrich for his work in the snowy season: He is almost infamous for helping keep schools open. He told one story at the ceremony that summed it up: His mother used to babysit a teacher’s children, and they would tell her that if her son stayed in bed, they could finally have a snow day.

But every day in the winter, Goodrich gets up at 3 or 4 a.m. to check conditions, and if the streets need to be plowed, he tries to be out there on the first shift.

Plowing snow can be challenging, especially in Vermont, he said. One Christmas night, he recalled, his truck slid and rolled over, trapping him against the trees. But Goodrich never thought about quitting.

Nini Anger, executive assistant to town administrator Lee Krohn, helped put together the event and got members of the town to serve cake too. She said the town was happy to come together for Goodrich because “everybody knows him.”

“He seems a little gruff on the outside,” Anger said, “but he’s pretty soft on the inside.”

That lines up with the job itself. It’s tough, sometimes rugged work, but he’ll keep doing it.

Editor’s note: Abby Carroll is a reporter with the Community News Service. Student reporters at CNS provide local news under guidance from professional editors at no cost. TNR was not involved in the reporting or editing of this story.

Image courtesy of Town of Shelburne