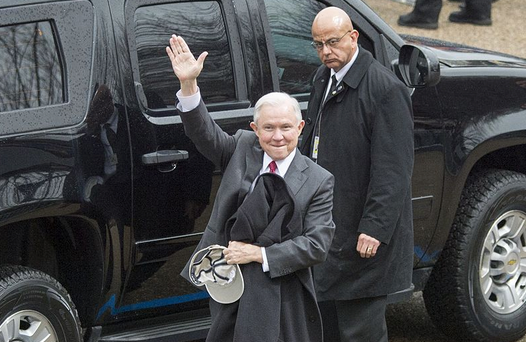 Sessions heralded Miami-Dade County, the first jurisdiction to reverse its sanctuary policy after President Donald Trump took office, as an example of how localities can work with federal officials who enforce immigration law.

“I know that Miami-Dade will be an example of the good that comes from following the law. We have already seen that: The same Independence Day weekend when Chicago suffered more than 100 shootings and 15 homicides, Miami-Dade also had a historic number of shooting deaths—zero,” Sessions said during his remarks at PortMiami.

Sanctuary cities endanger not only their own citizens and police but federal immigration officers, Sessions said, yet “have the gall to feign outrage when their police departments lose federal funds as a direct result of their malfeasance.”

Sanctuary cities are municipalities that opt against working with federal law enforcement on applying immigration law to illegal immigrants.

“So to all ‘sanctuary’ jurisdictions across the country, I say this: Miami-Dade is doing it, and so can you,” Sessions said, adding:

Work with us to enforce a lawful immigration system that keeps us safe and serves our national interest. The Department of Justice will not concede a single block or street corner in the United States to lawlessness or crime. Nor will we tolerate the loss of innocent life because a handful of jurisdictions believe that they are above the law.

The attorney general’s remarks come two days after California joined the cities of San Francisco and Chicago in suing the Justice Department for saying it would withhold certain law enforcement grants from sanctuary jurisdictions. The separate lawsuits claim the Justice Department lacks authority from Congress to put conditions on the use of the funds.

The Trump administration’s policy on sanctuary cities includes requiring localities to give 48 hours’ notice to federal immigration officials before releasing an illegal immigrant jailed for another crime. The policy allows time for such prisoners to be taken into custody by U.S. Immigration and Customs Enforcement, known as ICE.

“By placing unconstitutional immigration enforcement conditions on public safety grants, the Trump administration is threatening to harm a range of law enforcement initiatives across California,” Becerra, a Democrat, said. “This is pure intimidation intended to force our law enforcement into changing the policies and practices that they have determined promote public safety.”

Chicago Mayor Rahm Emanuel, a Democrat, has been an outspoken critic of the administration’s policy.

“So if voters in Chicago are concerned about losing federal grant money: Call your mayor,” Sessions said, adding: “Rather than acknowledge soaring murder counts or the heartbreaking stories told by victims’ families, Chicago’s mayor has chosen to sue the federal government.”

The Trump administration contends its policy on sanctuary jurisdictions simply puts Justice Department grant-making in compliance with existing federal law. The administration argues that, in a danger to public safety, sanctuary cities release thousands of criminals each year, resulting in preventable murders and other violent crimes.

A Harvard-Harris poll found that 80 percent of voters agree that local authorities should report to federal agents when they come in contact with illegal immigrants.

The issue isn’t entirely an either-or situation, since many localities across the country want to work with federal immigration officials but feel constrained by certain state policies, said Jonathan Thompson, executive director of the National Sheriffs’ Association.

The National Sheriffs’ Association has worked with the Justice Department and the Department of Homeland Security to develop a plan to make local jurisdictions safer from both crime and litigation.

“The overwhelming number of sheriffs across the country want to adhere to the rule of law,” Thompson told The Daily Signal in a phone interview:

But disagreements between state and local jurisdictions carry risk. It can be financial roulette. If you free someone, an offender could harm another victim. If you hold them, the ACLU will come in and sue, and probably win at the district court level. … We want to legally and constitutionally transfer these detainees over to ICE.

Local police are not the problem. They risk their lives each day in service of the law and the people they protect. The problem is these sanctuary jurisdictions tie our police officers’ hands and endanger federal immigration officers as well when they are forced to pursue these criminal aliens outside of the jails and prisons. Yet these sanctuary jurisdictions have the gall to feign outrage when their police departments lose federal funds as a direct result of their malfeasance.

“The people of Miami-Dade know that the rule of law guarantees equality and opportunity,” Sessions said. “Protecting this guarantee is why the government of Miami-Dade made its decision to work with federal law enforcement, not against us.”

Miami-Dade was not always a model, said Jessica Vaughan, director of policy studies at the Washington-based Center for Immigration Studies. It previously was identified as one of 10 jurisdictions that could lose funding, but developed a plan to work closely with federal officials.

“This shows that federal government sanctions, in many cases, can change policies,” Vaughan told The Daily Signal. “I wish they would do it for the right reason, because sanctuary policies are a threat to public safety. But sometimes money talks. Other cities want to be martyrs to their sanctuary policy.”

Smaller jurisdictions in Massachusetts, Oregon, and Washington state, she said, also are adamant about not working with ICE.

“This is not a coercion of local law enforcement to enforce federal law, it’s simply asking a city to notify the federal government if and when it releases a criminal illegal immigrant,” von Spakovsky told The Daily Signal. “The lawsuits border on frivolous.”