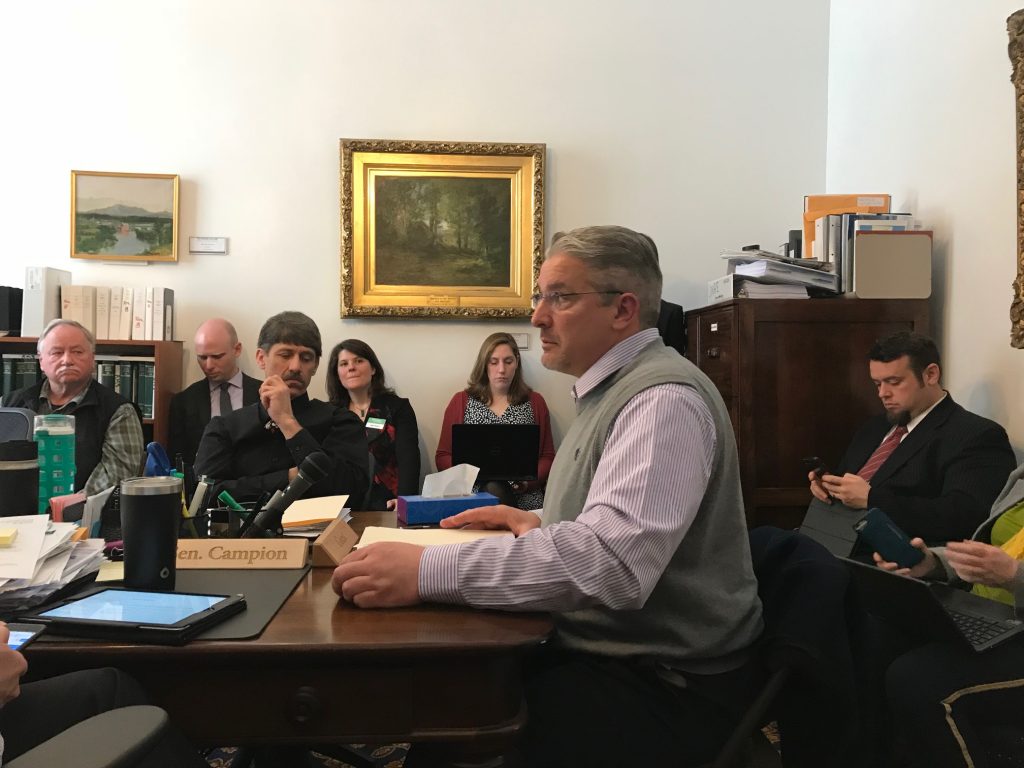 A REALLY, REALLY TOUGH JOB: Jim Bradley, president of the Home Builders and Remodelers Association, tells senators that the weatherization industry is lacking in regulation and a qualified and willing workforce.

MONTPELIER — While the the Vermont House has doubled the fuel tax to fund ongoing weatherization projects across the state, the Senate Committee on Energy and Natural Resources is figuring out what to do with all the money.

Senators were told Friday morning that weatherization is some of the most demanding work in the construction industry. At the current pace, weatherization efforts are going to hit well below the mark for state energy efficiency targets.

“Basically, in Vermont we are trying to meet the state’s mandated energy goals, which we’re gonna fail miserably at without some more help,” Malcolm Gray, of Montpelier Construction, told members of the committee.

Gray has been a contractor for 40 years and has been working with Efficiency Vermont for about 15 years. He stressed to the committee that weatherization is a challenge.

“It’s hard for people to keep employees and even companies in Vermont,” he said. “It’s really hard work, the margins aren’t very good. It’s a reasonable markup, but nationally, people look at us like we’re crazy.”

Jim Bradley, president of the Home Builders and Remodelers Association, said that another problem for the weatherization industry is a lack of enforcement for standards. He said some companies will adhere to due diligence and follow the right procedures, and then they will get undercut by companies that aren’t following best practice.

He said it’s the customers who lose out.

“They think they are getting a well-constructed home or an addition put on or heavy renovations, but without adhering to these standards and without enforcement, there really is no measure to ensure that they are being protected on the consumer level,” Bradley said.

He said the only recourse for customers right now is litigation, and in the examples that he’s seen so far, the homeowner often ends up spending more money on court costs than the potential awards.

He added that in addition to wasted money, there are health concerns if a home is not properly vented with the proper materials during a weatherization project.

He echoed Gray’s sentiment that it’s tough to hire and maintain the workforce. He said some of the roof and basement work can be physically exhausting as well as unpleasant, such as when working with rotted materials or rat droppings.

“The work is very, very tough. I actually hired and trained someone, he started working for us, and then he decided to join the Marines,” he said.

Abby White, director of communications for Efficiency Vermont, talked about where her state-created organization fits into the picture. Her organization plans to spend $2 million on weatherization in 2019. They work with contractors to provide incentives, support and quality control.

They also work with homeowners to get them in state incentive programs such as Capstone, which focuses on helping income-sensitive families with substantial weatherization projects.

Right now there is a long waiting list for the program — those on the back end have to wait at least a year or two. These are comprehensive full-home efficiency projects. The most expensive projects generally are in the $7,000 to $10,000 range.

White said they are looking into allowing some smaller short-term projects to get more homeowners into the program.

She said it’s difficult to get homeowners who earn in the range of $80,000 and $120,000 because they don’t have access to free services, but they also don’t have their own money for it.

She said there is a conscious effort to keep the physical work in the private sector.

“It’s our interest to see it done through the private market,” she said. ” … We want to grow those businesses so over time as this work becomes more commonplace, we can take those incentives and move them elsewhere.”

Committee Chair Sen. Christopher Bray, D-Addison, asked White about the adoption of cold-climate heat pumps. These electric heating systems have been known to fail in extremely cold temperatures, but with good weatherization of the home they are known to perform better.

White mentioned that the newer heat pumps are built more for Vermont weather. Matt Cota, executive director of the Vermont Fuel Dealers Association, has warned that the technology failed dramatically during a 15-day bitter cold spell in 2018, and conventional fuel oil backup systems had to bailout Vermonters left in the cold.

Even while the fuel tax has doubled in the full House, the House tax committee has raised revenue for next year’s weatherization to $850,000.