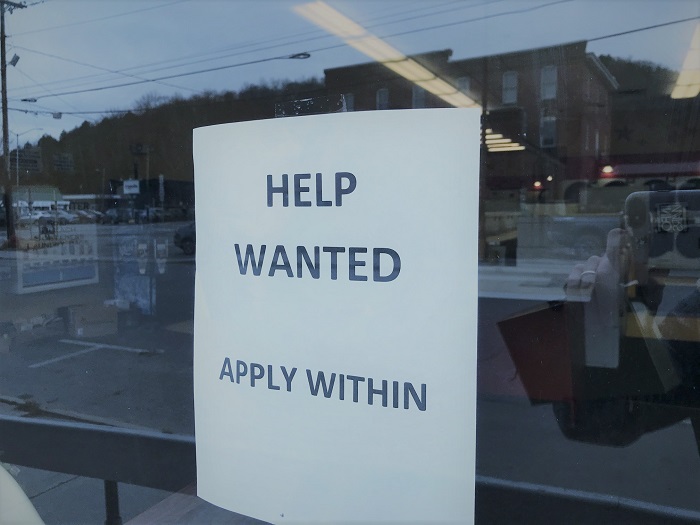 HELP WANTED: Employers are telling lawmakers they will not be able to find employees if rich unemployment benefits incentivize workers to stay home rather than apply for jobs.

Senate lawmakers are locked in a heated debate over a proposed $50 million unemployment tax increase that could have some laid-off Vermonters receiving more than $600 per week in combined state and federal unemployment assistance.

The bill under discussion, S.10, stalled Friday prior to receiving a vote on second reading because the power went out at the Statehouse.

As passed by the Senate Committee on Economic Development, Housing and General Affairs two weeks ago, the bill proposes raising the maximum weekly benefit for laid-off workers by 20 percent for a year. On top of that, it would allow $50 per week to be issued to claimants with dependents — permanently. Finally, S.10 would spread out an impending hike in unemployment insurance taxes over several years.

During Friday’s Senate session, the bill’s sponsor, Sen. Michael Sirotkin, D-Chittenden, introduced a compromise amendment to remove the 20% max weekly benefit increase, limit the $50 payments to a duration of five years, and freeze the tax unemployment insurance schedule and taxable wage base. It also proposes that the Vermont Department of Labor dole out an additional $66 million in unemployment benefits over the next 10 years.

Sen. Randy Brock, R-Franklin, one of the bill’s most outspoken critics, blasted the bill as severely harmful to businesses.

“Virtually every employer group in the state who responded after this bill was put out has raised considerable concern about the effect of it, and the effect both in terms of total costs and also on our economic recovery,” he said. This will wind up certainly over a longer-term, over this first year of rate one, this will result in more costs and increased money being taken out of the [Unemployment Insurance Trust] Fund and more pressure on the fund that exists right now.”

Brock added that experts have warned the economic development committee that the unemployment system could be in danger of collapse.

“We run a very significant risk of serious damage and system failure,” he said. “That was made clear to us, and the committee made a decision that they’ll figure out how to do it because we’re smart and we’re in the 21st century. Well maybe we will, I hope we will. But I’m concerned that we will not with this bill as it exists right now.”

While S.10 relates to extending certain unemployment insurance provisions that have resulted from the response to COVID-19, advocates for small businesses say they are not on board with aspects of the bill.

“The [proposed] increases, coupled with an additional federal $300 weekly benefit provided in the American Rescue Plan Act of 2021, would mean a large number of workers in Vermont would make significantly more on unemployment than if they return to work,” a statement released by the Vermont Chamber of Commerce reads.

The Chamber estimates that maximum UI (unemployment insurance) payouts would reach $635 with additional benefits still available for those with the right qualifications. The bill also ties unemployment benefits to 57 percent of the state’s annual average weekly wage starting in July 2022.

The original purpose of the bill, which the Chamber originally supported, was to prevent significant UI rate schedule increases and provide universal experience rating relief. Provisions the Chamber testified in favor of include freezing the employer UI rate contribution level and ensuring experience rating relief is provided to employers who were forced to furlough employers because of the pandemic.

However, the Chamber warns that additional tax increases and benefits hikes “will disincentivize large portions of the workforce from returning to work when businesses are able to safely reopen, while also adding an additional financial burden for employers.”

During a meeting of the Senate Committee on Economic Development, Housing and General Affairs on Thursday, Kelli Kazmarski, an attorney with Vermont Legal Aid, disagreed that more benefits would cause some Vermonters to refuse to seek jobs.

“[There was] sort of an underlying assumption in some of the testimony yesterday that there is a need for threats or sticks about fraud, or perhaps this is a reason to not increase benefits because it would disincentivize people to look for work,” she said. “It’s simply not true that people can refuse work and stay on unemployment. I heard a few people testify yesterday suggesting that ‘If I had the choice to make more money on unemployment I would choose that too.’ But that is a false narrative.”

The issue of benefits fraud also came up during the Thursday meeting of the committee. Kazmarski said she does not think lawmakers need to implement new amendments to mitigate fraud.

“We believe that there is enough in the existing system to handle the fraud that does exist,” she said. ” … We are not naive, we know that there are certainly bad actors out there who are going to try to defraud the state no matter what the legislature does. There’s no full-proof way to prevent that.”

Brock on Thursday asked Kazmarski why no one is ever prosecuted for fraud.

“If the laws are adequate, why don’t we have fraud prosecutions?” he asked.

Kazmarski said there’s a system in place where the person determined to have committed or attempted fraud is punished by not being allowed to apply again for the benefits for a set period of “penalty weeks.”

“As I recall, that tool was what the department had to sort of prosecute, if you will, these people who are trying to fraudulently use the unemployment system,” she said.

Brock continued that, based on testimony presented to the committee, fraud cases including one of more than $100,000 were never prosecuted.

“One of the issues I gathered from testimony to the department previously, is it was under the impression that the legislature had repealed the laws relating to criminalizing fraudulent behavior, and therefore they had no mechanism to proceed,” he said.

Since the full Senate was unable to vote on the bill due to Friday’s power outage, the upper chamber plans to continue debating the bill on Tuesday.