This commentary is by Matthew Strong, executive director of Vermonters for Good Government.

There has been a bit of a back and forth debate in the Vermont opinion pages about whether or not the process that brought forth Proposal 5 (aka Article 22), the proposed constitutional amendment that would end any state regulation of abortion, has been public and transparent. Those of us opposed to the vague and confusing language of Proposal 5 believe that voters really haven’t been given an opportunity to fully understand what a “yes” vote this November really means for women, unborn children, fathers, parents, society at large, and a host of other potential unintended consequences.

Those pushing for the amendment to pass, such as Peter Sterling, chief of staff to former Senate President Pro Tem, Tim Ashe, believe, “Vermonters have had over two years to debate the proposal as it works its way through the legislative process and then a chance to vote directly on it in November. This does not seem like a process that prevents voters from ‘weighing in.’” (February 22, 2022) 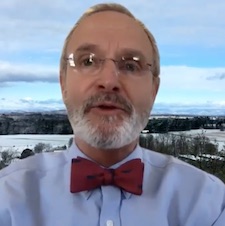 Well, we got some evidence to boost the side saying Proposal 5/Article 22 has not been publicly vetted to the degree it needs to be when an Addison County resident, who asked not to be named, emailed her senator, Cristopher Bray (D-Addison) if he would explain his position on Article 22. Bray — a sitting senator who has voted on this issue twice over two biennia –responded, “Can you tell me what Article 22 is — I’m not familiar with an issue with this number.”

If a serving state senator doesn’t know what Article 22/Proposal 5 is — not even its name and general intent let alone its potential impact — how well informed do you think the average voter is? The answer is “not very,” and this is a problem.

Mr. Sterling is right in that the procedure to amend the Vermont Constitution takes years. But we all know what’s happened over the past two and a half years. Covid shut down all large gatherings, such as public hearings on proposed constitutional amendments. It shut the State House for in person meetings, and it did not re-open until March of 2022.

As a result, there has been very little public conversation about Proposal 5, yet we the voters are supposed to give final approval or disapproval to this amendment at the ballot box this November (or up to 45 days earlier than that for those voting early). It is critical that this be an informed vote, because if Proposal 5 becomes constitutional law there’s no easy going back from a terrible mistake.

Proposal 5 says in its entirety:

That an individual’s right to personal reproductive autonomy is central to the liberty and dignity to determine one’s own life course and shall not be denied or infringed unless justified by a compelling State interest achieved by the least restrictive means.

This language is weirdly vague and understanding what it really means in practical terms deserves considerable public conversation. The Cliff’s Notes version is that it’s supposed to protect a woman’s right to an abortion a la Roe v. Wade, but it doesn’t actually do that. As you can see the full text never mentions “women,” “abortion,” or “pregnancy.” This is legally problematic.

On the one hand, giving an expectant mother an unfettered right to “reproductive autonomy” up to the point of birth means that the state has no constitutional power to restrict any, including late-term, abortions. Most Vermonters, including those who are pro-choice, don’t agree with this policy. On the other hand, since this language gives all Vermonters, including expectant fathers, an equal right to reproductive autonomy, Proposal 5 means a father could challenge in court the mother’s desire to carry the pregnancy to term or not. Pro-choice women certainly don’t agree with that policy. But this is what a yes vote on Proposal 5 could bring about.

Before anyone votes yes on Proposal 5 because the bumper sticker “reproductive autonomy” sounds good, it is critical to genuinely understand what the legal language actually says and what it actually does. Our elected officials such as Senator Bray may be ignorant, but you can’t afford to be. We’re the ones making law this time. Let’s make sure we get it right.

4 thoughts on “Senator doesn’t know what abortion amendment is”