On Tuesday, Annette Smith, executive director for Vermonters for a Clean Environment, testified before the Senate Committee on Natural Resources and Energy regarding Vermont’s plans to meet ambitious reduction targets for carbon dioxide emissions.

As lawmakers discuss S.5 “relating to affordably meeting the mandated greenhouse gas reductions for the thermal sector through electrification, decarbonization, efficiency, and weatherization measures,” Smith said the bill should be called the “stupid heat standard.”

“It’s a solution in search of a problem and it’s a bad idea,” she said. 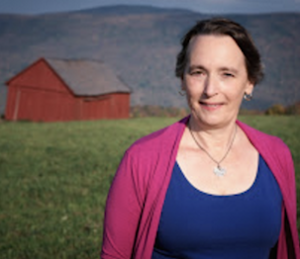 Annette Smith is the director of Vermonters for a Clean Environment

According to Smith, Vermont has been incrementally adopting climate policies that take the state in the wrong direction.

“I call it death by a thousand cuts,” she said. “We are dealing with a biodiversity crisis, and that’s where Vermont really could be a leader in protecting nature.”

She highlighted numerous examples of green energy projects taking up valuable land across the state, be it for agriculture or forest.

No help from other environmental groups

She said that prime-ag soil and forests are getting spoiled by large solar farms that are steadily popping up around the state, but that no other environmental groups are getting involved.

“I’m just getting new calls [about this] all the time and it’s unbelievable,” she said. “… I’ve been saying for years that we’ve got to do something to establish some policies to protect our forests and fields, and the whole state is just sitting ducks.”

Towns not getting a voice in energy projects

In particular, Smith criticized Act 174, passed in 2016, which was written to give towns a voice in the siting of energy projects. The law is “not working as intended,” she said, adding that “we need a new strategic approach to energy development.”

Vermont is committing at least $250 million to green technology upgrades and infrastructure. In addition, the federal government’s Inflation Reduction Act has been described as the largest investment in green initiatives in America’s history.

Smith said S.5 is “distracting this important committee from the very necessary energy policy work and implementation discussions that we should be having, that has not happened in recent years in the legislature.”

As energy is increasingly electrified, Smith noted, the demand for electricity will rise.

“Where is the renewable electricity going to come from to fuel all this new consumption?” she said. “And if it is to be decided in Vermont, is the current developer-driven and developer-biased process the most equitable, just and environmentally sound method to achieve this transition?”

“[We are] pushing more work on the PUC, that is already doing more than any other PUC in the country in siting telecommunication and energy projects,” she said, adding that burdening the commission has “completely harmed the average Vermonter.”

A key component of climate proposals involves the purchasing and selling of green carbon credits. Smith said S.5 includes “a convoluted credit system whose primary beneficiary will be Green Mountain Power, Vermont Gas Systems, and those installers who are already doing what the Clean Heat Standard would require.”

A lack of accountability

She also criticized the Vermont Climate Council for not having representation from rural areas, and said the basis for forcing Vermonters to move to an electrified energy system has “not been supported by actual data.”

“You should require VGS [Vermont Gas Systems] to provide data on the fossil-fuel consumption reduction they have seen as a result of electric heat pump and water heater installations to date,” Smith said. “That’s one regulated utility that has data — let’s see what the data is.”

At the beginning of the meeting, reporters were asked to leave the room when its COVID-related limit of 10 was reached. The policy has prompted some journalists to threaten legal action.

Smith’s entire testimony given Tuesday to the committee can be viewed online here.