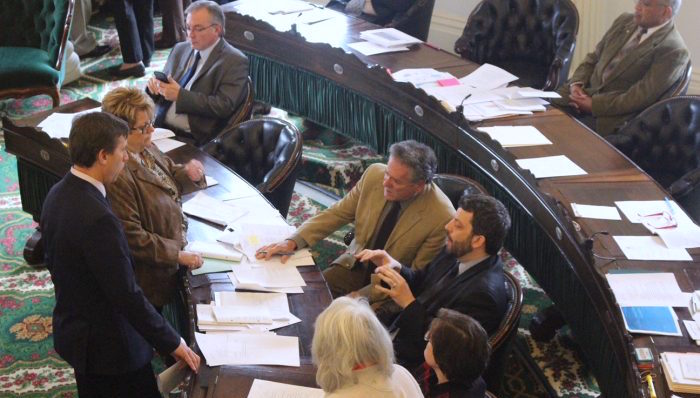 YOU MUST HAVE IT: Democrats and Progressives, including Sens. Chris Pearson, P/D-Chittenden (middle), and Michael Sirotkin, D-Chittenden (to his right), want Vermont to create a state individual mandate after the penalty for the federal Obamacare mandate was removed by the Republican Tax Cuts and Jobs Act of 2017.

MONTPELIER, Vt. — The Vermont Senate on Tuesday voted to amend a bill which will create a summer study committee to examine potential penalties for not purchasing health insurance in Vermont.

The amendment to H.696 as proposed by Sen. Michael Sirotkin, D-Chittenden, strips the bill of plans for a state individual mandate, leaving only a study group to evaluate different penalties that might be imposed for failure to carry health insurance. Lawmakers could then raise the issue of an individual mandate at a later time.

“Our solution was to remove, temporarily, the ongoing individual mandate that had a position in Vermont law and wait for the result the result of the summer study task force to come out with the penalty,” Sirotkin said. [We could] then appropriately combine both the penalty and the mandate together in a piece of legislation next year.”

Sirotkin and and other Democrats and Progressives think a state individual mandate is necessary after the penalty for the federal Obamacare mandate was removed by the Republican Tax Cuts and Jobs Act of 2017.

As the session went on, Sen. Claire Ayer, D-Addison, asked for a clarification on the status of Vermont and federal law, and Sirotkin explained why he thought a state penalty would be a good idea.

The fear some lawmakers have in letting Vermonters refuse health insurance with no consequence is that premiums would likely rise for those who remain in the system.

However, a study by the Green Mountain Care Board published in February indicates that when the IRS penalty expires this year, the anticipated rate of uninsured may only rise from 3.7 percent to 4.3 percent.

This past year, premiums for Vermont went up an average 8.5 percent, according to healthinsurance.org, leaving at least one lawmaker to question if a state individual mandate is the way to go.

Sen. Randy Brock, R-Franklin, was the only member of the Senate Finance Committee to vote against the bill. On the Senate floor, he said the language of the bill and amendment makes the inappropriate assumption that imposing an individual mandate is a foregone conclusion.

STRATEGY SESSION: Senate Republicans consult one another during debate over a state individual mandate for Vermonters.

“I voted against this because I believe by that by stripping out the state mandate and leaving the study group alone, we have created the assumption of the end result of the study,” Brock said. “I don’t agree with that and I oppose that in principle.”

He added that penalizing Vermonters beyond their existing expenditures may not be a good idea.

“I certainly question as to whether the appropriateness of the statewide mandate makes sense in the first place,” he said.

Sen. Chris Pearson, P/D-Chittenden, said that before the third reading of the bill, he will propose another amendment to indicate that a state mandate will be effective at some point in the future.

“I’m wondering if the committee considered just delaying the effective date of the mandate while we figure out how to enforce the mandate,” he said. “So in other words, put it out there that we will have a mandate but take the necessary time to figure it out.”

Senate President Pro Tem Tim Ashe, P/D-Chittenden, indicated that Pearson would be allowed to present such amendment before the third reading.

Brock also noted that the status of the federal mandate could change with the politics of Washington.

“The federal government can change the underlying mandate which this now refers to — it can change that at any time without our knowledge, involvement or anything else and we’re stuck with what’s left.”

Brock told True North afterward that the bill was rushed through his committee.

“The bill was hastily considered in the Senate Finance Committee,” he said. “Stripping out the language regarding the state individual mandate — which is what the bill was all about — leaves a study committee that, based on the wording of the amended bill, makes the assumption implicit that there will be an individual mandate.”

Brock voted against the amendment on the Senate floor and said if Pearson introduces an additional amendment, he will oppose that as well.

Sirotkin said his proposal fell between Pearson’s and Brock’s proposals.