Vermont could join more than a dozen other states in an effort to undermine the Electoral College system that has been in place since the nation’s founding.

On Tuesday, Sen. Chris Pearson, P/D-Chittenden, testified on behalf of S.122, a bill that would allow the canvassing committee to issue certificates of election to the electors nominated in association with the national popular vote winner in a presidential election.

“As folks know, I continue to work on the national popular vote around the country, so I pay attention to this quirky system that we have for electing the president,” Pearson told the Senate Committee on Government Operations. 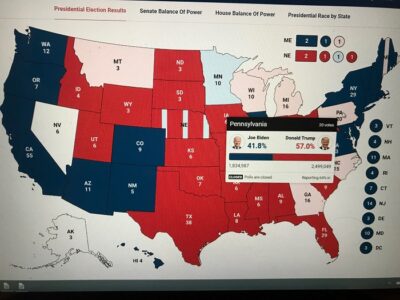 He noted the the U.S. Supreme Court ruled last summer on whether or not there can be “faithless electors.” In the Electoral College system, delegates from each state are expected to vote for the president based on how the residents of that state voted at the polls. The court ruled in favor of letting states “bind” their electors, and added that they can be tied to the national popular vote, instead of the results of the Electoral College system.

According to Pearson, “faithless electors” are those who cast their votes differently from their electorate. He does not believe such occurrences have impacted the overall outcome of a presidential election.

Sen. Jeanette White, D-Windham, said the bill may not advance from this committee this legislative session. Pearson noted that the soonest his legislation would be relevant is the 2024 presidential election.

Sen. Kesha Ram, D-Chittenden, was an elector for the last election. During the hearing she said it could be difficult getting the change Pearson wants.

“I got some calls from national Electoral College experts and people who look at the issue, and for many of them, the verdict was it would take a long time, or be quite impossible, for us to be able to abolish the Electoral College,” she said.

Proponents of the Electoral College system argue its main purpose is to give small, rural states a voice in elections, and to help contain the impact of potential voter fraud.

“The Electoral College lessens the chance of voting fraud affecting the outcome of a national vote by compartmentalizing the outcome among the various states,” Victor Davis Hanson wrote in a recent op-ed. “It usually turns the presidential election into a contest between two major parties that alone have the resources to campaign nationwide.”

The public integrity of the national elections is at a historic low. Nearly two-thirds of all Republicans believe the 2020 presidential election was stolen from former President Donald Trump.

In his opinion piece, Hanson addresses the compact of states that Pearson referred to in the committee.

“Democrats have pushed “The National Popular Vote Interstate Compact,” an agreement among a group of states that would force state electors to vote in accordance with the national popular vote and ignore their own state tallies,” Hanson wrote.

According to Pearson, 15 states have signed on to that compact.