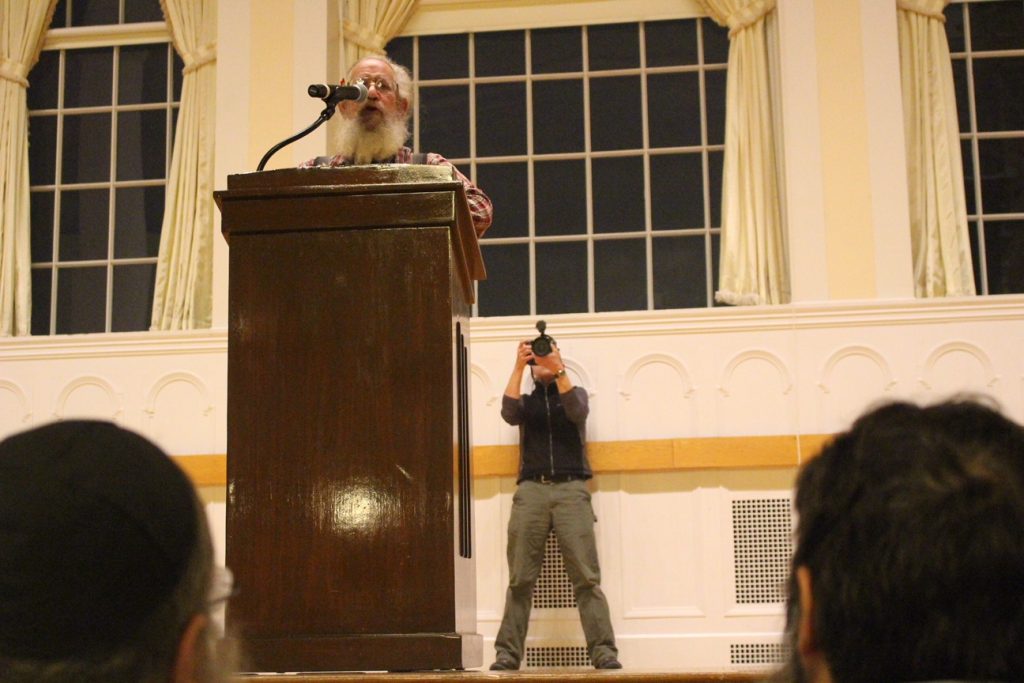 SECOND AMENDMENT STRIKES BACK: After weeks of hearing about the need for gun control, around 200 gun-rights supporters gathered at UVM to defend firearms freedom. Gun Owners of Vermont President Eddie Cutler was among the leaders invited to speak on the issue.

BURLINGTON — A half dozen gun-rights leaders spoke Friday at the University of Vermont’s Ira Allen Chapel to oppose gun control measures being advanced in Montpelier by state lawmakers.

UVM freshman Jace Laquerre, who helped organize the rally, introduced the speakers. He started by noting one key figure was not present.

“We invited the governor here tonight, but he did not show up,” Laquerre said, provoking loud boos from the audience.

Gov. Phil Scott in recent weeks has voiced his support for gun-regulation bills S.221, H.422, H.675 and H.876. These bills, respectively, allow police to take guns in a domestic violence situation, allow the removal of guns from “high risk” persons at a judge’s discretion, and reinforce the federal bump stock ban.

Scott told True North on Saturday that he hears the concerns of Second Amendment groups and is making plans to meet with them. 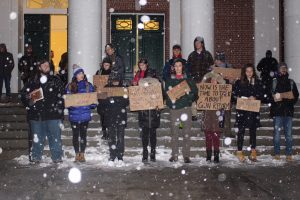 STUDENTS FOR GUN CONTROL: About 20 protesters with signs appeared at Friday’s pro-gun rally to call for action to curb gun violence.

“I’ll be trying to get with them individually, I’m meeting with some groups next week,” he said. “Nothing that I propose infringes on the Second Amendment whatsoever, so I’m still an advocate for the Second Amendment, but I think we can be doing a better job in protecting our kids and our schools.

Scott said that after police helped avert a potential mass shooting in Fair Haven last month “we should learn from that lesson and do things a little bit differently … while protecting our Second Amendment rights.”

Rep. Patrick Brennan, R-Colchester, another speaker at Friday’s event, commented on the actions going on in the Statehouse since a Feb. 14 school shooting in Parkland, Florida, killed 17 students. He cautioned that understandably high emotions following the shooting are getting in the way of a reasoned response.

“They are running on high emotion,” he said. “Everyone was really eager to come back home on Town Meeting and stand in front of folks and say, ‘I did something.’”

He said S.221, which concern persons considered a danger to themselves or society, was originally a good bill that gun owners could get behind. But then it went over to the House Appropriations Committee and got made into something less desirable.

“We also had some good gun owners and gun people voting for it because of overwhelming emotions. And they got to go home and [brag that they did something]. … But I didn’t, and you know what, if I lose the election over this, so be it.”

One UVM student in the audience asked how the speakers could advocate gun freedom when, according to a CNN poll, 70 percent of the nation supports new gun restrictions.

Rep. Janssen Willhoit, R-St. Johnsbury, said he wasn’t sure about the 70 percent figure, but assuming that was true, his loyalty is to the Constitution.

“Let’s say we polled all of Vermont and 70 percent say we want these laws. The fact of the matter is, and I’m thankful for this, we are a constitutional republic. … And I and all our committee members took an oath to the U.S. Constitution and the state constitution, and so I have a duty — even if the people want it — if that’s unconstitutional, I have to protect that Constitution.”

Outside the building, as it snowed, about 20 protesters gathered to hold signs and call for action to curb gun violence. Among them was Eden Harari, a freshman.

“Right now … we are remembering the people who have been lost by gun violence in America, most recently in Parkland,” said UVM freshman Eden Harari. “That’s our message out here — to say we don’t support that what they believe and that we just want to show them that there are a lot of students on campus who don’t support them.”

He noted a contradiction that lawmakers, some of whom want to take away guns, have armed protection: “It is the lawmakers who are currently contemplating taking away our Second Amendment rights.”

“Guarded by several armed and trained security guards, they keep themselves very safe with guns but are constantly taking away our rights to defend ourselves,” he said.

“I wonder how many of them would actually show up to work at the Statehouse if one day they said we are going to replace all those armed security guards with signs that say ‘gun free zone.'”