Advocates for social justice and organic farming oppose S.54, the retail sales, taxation and regulation of marijuana. Barring major changes in the upcoming special session, it should be scrapped for the year, they say.

S.54 passed the Senate despite opposition by the state’s leading law enforcement, medical and youth drug prevention experts. A substantially different version passed the House Feb. 27. Supporters want a House and Senate conference committee to send a unified new version to both bodies for a vote during the “Covid-19 budget” legislative session starting next Tuesday, Aug. 25.

But Wednesday, S.54 Conference Committee talks were bumpy, and not just because it was the first-ever “remote” Vermont legislative conference call. 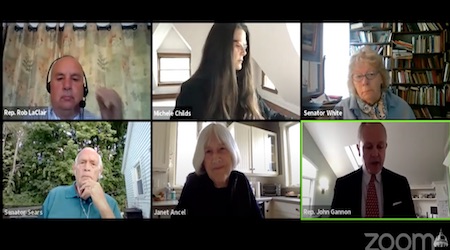 The S.54 Committee of Conference met Wednesday through Zoom. “There’s no point in us continuing to meet … this is a deal breaker,” Sen. Dick Sears (lower left) tells Rep. John Gannon (lower right) after learning about seat belt provisions in the retail pot bill.

One of the bumpiest moments occurred at the 102-minute mark when Judiciary Chair Sen. Dick Sears (D-Bennington) asked about a provision allowing police to pull over drivers observed not to be wearing seat belts: “Can house conferees explain how that gets into this bill?”

“As you know the Senate, the governor, have long opposed that and this is like a deal killer,” Sears responded. “I know I can’t get it through Senate Transportation. This is a huge stumbling block for the Senate. I’m disappointed. We’re getting complaints about equity and racial justice. I think this just adds to the number of [traffic] stops that occur.”

Sen. Joe Benning (R-Caledonia), a criminal lawyer, agreed: “A police officer does not need another reason to pull over a car, and in the middle of Black Lives Matter conversations, this does exactly the opposite of what we would hope a bill like this would be doing, to bring some kind of racial justice into this picture. I’m very concerned that if this is placed here you’re going to increase the number of times a car is stopped, not because they’re exhibiting any signs of impairment but simply because they haven’t put their seat belt on.”

Sen. Jeannette White (D-Windham) added, “this has nothing to do with cannabis taxation and regulation.”

Gannon was unmoved. “Well, I’m sorry you feel that way. This is a critical position for the House. You know a primary seat belt law increases seat belt usage by 14 percent and reduces fatalities by 8 percent.”

Sears was not interested in Gannon’s statistical review. He said abruptly there is no point discussing the bill further if the House insists on the seat belt provision. Eventually the conference committee moved on to other issues in S.54. The next meeting is scheduled for Monday, Aug. 24.

Even if House and Senate can reach agreement on seat belts, satisfying Vermont’s social justice community may prove a bigger challenge. Blacks have been on the short end of the marijuana policy stick and that needs to change, Mark Hughes maintains on the Justice For All website: “NO Taxation and Regulation Without Reparations Campaign – The legislature has the regulation of cannabis on the fast track.  The financial upside seems to have given everyone “war on drugs” amnesia. Regulating Cannabis without taking these factors into consideration is scandalous and immoral.”

Justice for All demands:

Farm groups like NOFA-VT and Rural Vermont worry that small, rural Vermont farmers will be left out of the marijuana sales bonanza. For example, Meadow House Collective observed on the August 19 Zoom meeting’s “chat” line that S.54 should encourage “farm stand sales and 100-300 plant grows for small farms and family businesses … but they will complicate it to the extreme to make it a gatekeeper bill for elites. … Consider how biased this bill is to urban and suburban campaign donors that will eventually rule the roost and excludes creating equity in the rural community … intentionally.”

It remains to be seen whether avid S.54-House version supporters like Gannon and House Government Operations chair Sarah Copeland-Hanzas can overcome heightened criticism both inside and outside the Legislature to a bill already beset by it — even within the House Democratic caucus. In February, S.54 passed the House 10 votes shy of a veto-proof majority, despite warnings by Democrats like Tom Bock (D-Chester) that the Legislature “would rue the day” it approved commercial marijuana, because Vermonters would suffer its unacknowledged social and health costs.

Notably, S.54 passed the House this year before Covid-19 decimated state revenue. While supporters say marijuana will boost revenue, the regulatory set-up will cost more than $2 million and Vermont revenue projections have declined as other states aggressively promote their own legal marijuana industries.