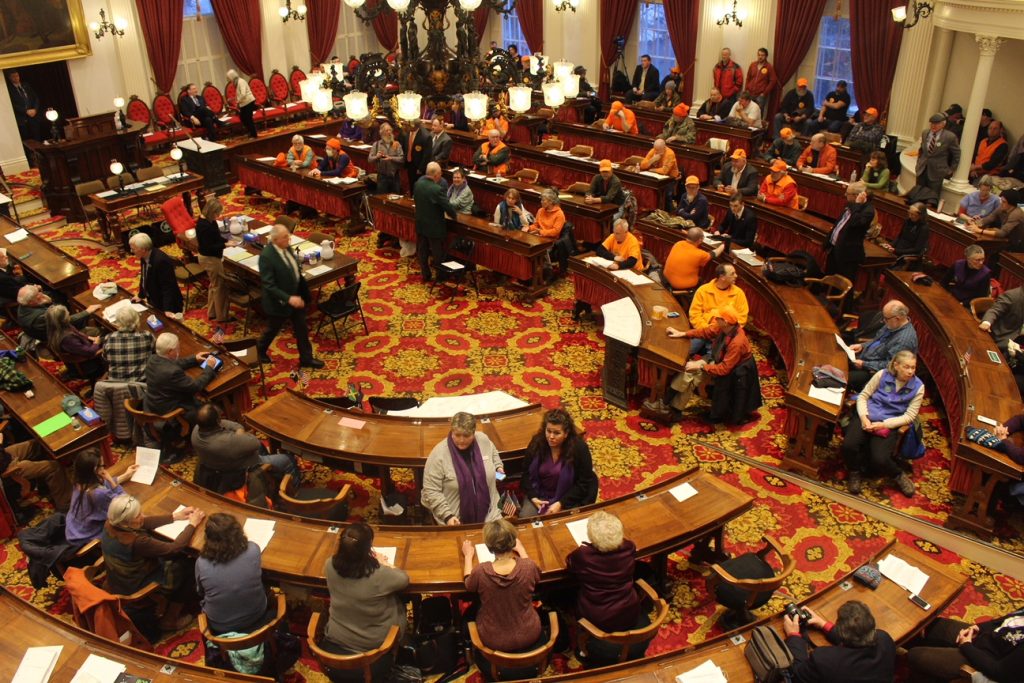 GUNS: Orange vests and hats are worn by Second Amendment supporters who met at the Statehouse to tell lawmakers they don’t want new gun restrictions for Vermont.

MONTPELIER — The red House chamber of the Statehouse turned orange Tuesday evening as gun rights activists by the hundreds filled the room to speak out for Second Amendment rights.

The gun rights public hearing comes as a trio of new gun control bills has emerged for another legislative session.

At least a dozen voices in favor of stricter gun control were scattered in between, as both sides of the gun control debate got ample representation at the microphone.

Three bills up for consideration this session include S.6 for universal background checks, H.422 for confiscation of firearms during a domestic violence incident, and S.221 for gun violence prevention orders.

On the pro-gun side, many speakers said the gun restrictions have been introduced before, and failed for a reason.

“I guess some folks didn’t learn last time that no means no,” said Eddie Garcia of the Vermont Citizens Defense League. “Look around you at all that orange — everywhere you see that, that’s a person who does not consent to, and probably feels violated by, yet another attack on their rights.”

Garcia emphasized Vermont’s 200-plus years of firearm-owning tradition, which is based on Article 16 of the Vermont Constitution, which says “the people have the right to bear arms for the defense of themselves and the state.”

William Robinson, regional coordinator for Gun Owners of Vermont in Washington County, shared his own story about how having a gun prevented an assault at his home.

“Guns in the hands of responsible ordinary citizens do more to deter violence then gun-free zones ever could,” he said.

About a year ago, Robinson, recounted, an irate tenant attacked his front door with a claw hammer. As he held the door shut, he called 911 and told the operator he was armed and ready to defend himself.

“When my tenant heard me say this to the operator, she immediately stepped away from the door and just started sobbing,” he said. “Even in her unbalanced mental state, she realized that by my being armed, I wasn’t going to allow her to harm me.”

On the pro-gun restriction side, Anne Herz, of Woodstock, shared the story of her son’s murder in 1991.

Elizabeth Deutsch, a gun owner from Hinesburg, said she was surprised by what she described as a lack of screening for her ability to safely use a gun when she purchased it.

“I think how we treat guns versus another weapon, the automobile, is an apt comparison,” she said. “In order to legally drive a car, I have to prove that I’ve met minimum standards of proficiency. I have to pass a test and show an expert that I was able to drive safely.

“My car has to be inspected and insured. I have to follow laws and there are limits to what is acceptable use.”

One gun-rights supporter, Eric Bailey of Essex Junction, made the case that any politician supporting gun control in Vermont is committing political suicide.

“Some politicians you just can’t reach,” he said. “In 1990 Peter Smith was favored heavily to beat Bernie Sanders for the open U.S. House seat. Then he spoke out against gun freedom, he paid for it with his career. He’s gone, and we’re still here.”

He went over a handful of elections since then where the gun control candidate fell from political power, including last year’s gubernatorial election.

“In 2016 Sue Minter ran against a Republican in the most liberal state in the nation, which on the same day voted Democrat 2-to-1 for president, but she made gun control her top priority. She was soundly defeated, she is gone, and we are still here.”