While New Hampshire Gov. Chris Sununu wants to reduce his state’s room and meals tax to help businesses weather the COVID economy, Gov. Phil Scott says that his administration may not be following suit in Vermont.

“I’m always in favor of tax cuts, but in this situation I’m just not familiar with what New Hampshire has done with their CARES funds and so forth,” Scott said at his Friday press conference. “But we’ve provided a lot of relief. We know that we need to provide more for the hospitality sector.”

Scott said that a lot more money is going to be needed.

“I mean, hundreds of millions of dollars more in aid is needed, and we’re hoping with the next economic recovery package that Congress will hopefully pass that there will be more funding available that we can distribute to them.”

“It can be done responsibly,” Sununu has said of the cuts he is proposing. 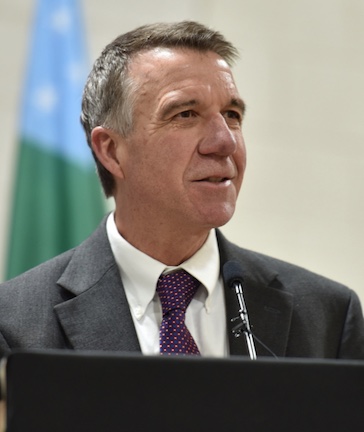 NOT LOOKING AT TAX CUTS: Gov. Phil Scott will not be immediately proposing new cuts to the room and meals taxes, even though New Hampshire is discussing cuts to aid businesses in the hospitality sector.

Currently, both New Hampshire and Vermont have a room and meals tax set at 9 percent.

Scott says Vermont has taken a different approach to helping the hospitality sector — namely, choosing to give money directly to the businesses that need it.

“We just took a different path, and I don’t have any knowledge of how much they’ve given to their business sector out of the funds that they received. … Over the last few weeks we’ve seen it, that the restaurants are struggling and they’re not having the clientele that they normally do.”

Scott said that there is still a lot of fear among the public for going out.

“A lot of people aren’t don’t feel that they can go out to do that, and I respect that, and so they’re struggling. We’re so reliant on trade from other states … and we haven’t asked them to come, but we’re seeing the cross border support that we normally do. We certainly don’t have anyone from Canada coming in either — that impacts the hospitality sector.”

Asked if Vermont is making any cuts in government programs or staff during the economic downturn in any way similar to businesses, Scott hinted that his upcoming budget proposal will take into account the new economic realities associated with government responses to COVID-19.

“We’ve taken a number of steps ourselves,” he said. “We’re going to be presenting a budget that will be balanced based on reality in the next month, so stay tuned.”

He added: “We’ll do all we can with what we have, and again, we want to focus on economic recovery because we know that the businesses provide for the life and blood of the government — they provide the revenue that we need for the future, so we’re going to work hand in hand and make sure that we provide for the businesses that they can survive and then thrive in the aftermath.”

While the governors of Vermont and New Hampshire are both Republicans, Sununu has Republican majorities in their House and Senate, while Scott faces liberal majorities in both Vermont chambers.

Vermont now has hundreds of millions in lost revenue stemming from its clampdown on business activity in the state. However, it has about $200 million in rainy day funds from which to draw.