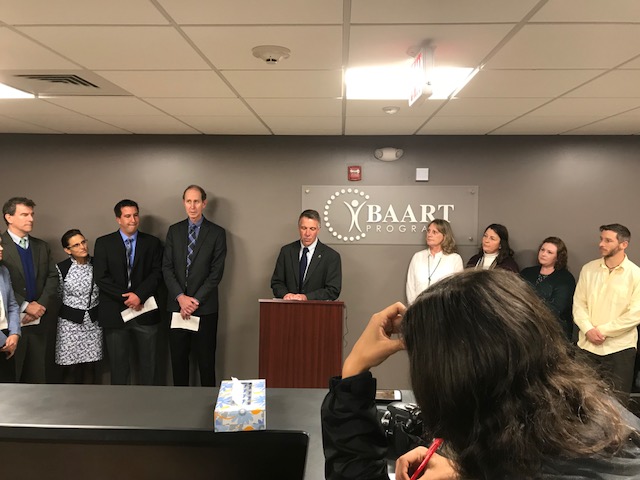 ST. ALBANS — Standing next to lawmakers and health leaders, Gov. Phil Scott on Thursday celebrated a new permanent opioid treatment hub in Franklin County that has a capacity of 700 and is already serving more than 200 patients.

“Ensuring timely access to treatment is important because it saves,” Scott said at a news conference. “People in treatment are much less likely to die of an overdose, and it also helps prevent prescription medicine misuse from crossing over to heroin use.”

“It helps people start recoveries sooner, and it makes it easier for those in need to ask for help,” he added.

This new facility is part of the BAART (Bay Area Addiction Research and Treatment) program, named after its San Francisco area origins in 1977. The St. Albans location has been open since late September.

“We’ve been open now over a couple of months, we’re already at 235 patients, and the phone keeps ringing.” said Jason Goguen, BAART Programs regional director of operations. “I don’t expect it to slow down.”

He added that he expected patients to level off at around 400, although the clinic has capacity for 700 addicts.

The additional hub alleviates pressure on the existing BAART facilities, of which there are four. For instance, the new location absorbed 90 patients from their Burlington location, and another 38 from Newport.

The new facility builds upon other recent milestones reached in the struggle to meet demand.

“We [had] the opportunity in September to celebrate in some respects the waiting list that was depleted, and that was a milestone that was worth celebrating,” Scott said. “But that doesn’t mean it’s over. As I said before, this isn’t a spike-the-football-in-the-end-zone type of moment.”

The new treatment center is part of Vermont’s “hub and spoke” model, in which a handful of top-tier recovery centers provide primary treatment before sending patients off to related local centers for continued progress.

Nationwide the epidemic continues to be a challenge. John Tracy, state director for the office of U.S. Sen. Patrick Leahy, D-Vt., shared a sobering statistic.

“[About] 64,000 people died in 2016 in substance abuse related deaths. Over a decade that’s the population of Vermont,” Tracy said.

Last week President Donald Trump declared the opioid epidemic a national public health emergency. Scott told True North that Vermont hasn’t received the additional aid yet, but he did call it a step in the right direction.

“Has it helped? Sure. Anytime we can put a spotlight on the issue, I think it’s helpful,” he said. “I believe that as we bring more attention to this epidemic, there will be more resources that follow.”

“Most of them involve … federal government transfers of money or resources to help manage the epidemic,” he said.

While most were supportive of the president’s move, Kathryn Becker Van Haste, an aide to U.S. Sen. Bernie Sanders, I-Vt., took the opportunity to criticize Trump.

“The president could have chosen to do this in a way that added additional resources if he had done it as a national emergency, but doing it as a public health emergency limited the amount of availability to provide new funding,” she said.

At another point, Becker spoke about the shift in focus from treatment to prevention.

“If we could reduce the supply of patients that need to come here, I think that would be a really great thing,” she said. “You know, treatment and recovery are something that we’re really figuring out.

Levine discussed the new prescribing rule that went into effect in July. The rule forces those who issue prescription medicines to take more caution.

“Early data is already showing the impact of the prescribing rule,” he said. “ … It began July 1, so I don’t want to give out further numbers that don’t have as much meaning as they will several months down the road.”

Goguen stressed that people should approach the matter of addiction with compassion rather than judgment if the effort is going to succeed.

“I ask you not to judge our patients. If you don’t know our patients, then I’m sorry to say that you will,” he said. “And what I mean by that is, substance abuse disorder can affect anyone at any time. It has no boundaries, it has no limitations.”

Levine noted that there could be as many as 8-in-10 opioid addicts who are not actively seeking treatment, so the state has many more people needing help.