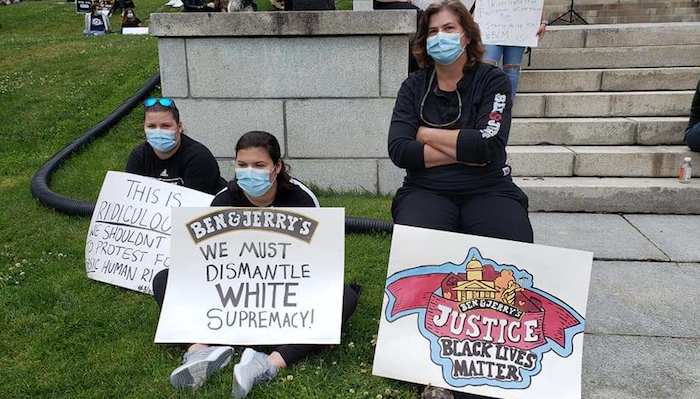 At his press conference Monday, Gov. Phil Scott spoke highly of the nonviolent police brutality protests conducted statewide, at which most people wore masks. He lauded the St. Johnsbury police officer and the young Lyndonville woman who, involved in a Black Lives Matter scuffle last week, have since met and resolved their differences.

Scott has taken heat on social media for encouraging but not requiring police brutality protesters to follow pandemic measures for socially distancing. Said one Chittenden County reader of this post on the State House lawn rally: “Looking at the number of people in that group who are not social distancing, please tell me again why our children are banned from playgrounds and why we can’t have our restaurants and churches open to full capacity? The hypocrisy in Montpelier is staggering.” A Barre woman added, “Hmmmm … and why is it ok to gather for this but not Independence Day!?”

Over the weekend, VTDigger reported that two of Vermont’s non-nursing home Covid-19 fatalities were Cambridge men who sat near each other at the March 10 UVM men’s basketball game in a crowded Patrick Gym. One of these men was former Rep. Bernie Juskiewicz. The possibility that either or both men contracted the virus at the game seems to highlight the need for strict, consistent public health measures at large gatherings.

Governor, some people who were already skeptical about the need for continued social distancing now say that since you’ve made an exception for the protesters, they plan to gather for large group events, irrespective of crowd size and reason for gathering. Others are willing to continue to follow the rules but are angry that these mass gatherings may actually extend the State of Emergency. What do you say to encourage them to stay the course when others can disobey the rules and risk the health of others without consequences?

I’ve been very proud of what happened over the weekend. We want to make sure people are safe. We hope there is not an outbreak because of that. I believe that how we have handled this has led to more safety, there hasn’t been as much violence of what we have seen throughout the country.

He was then asked by Vermont Daily why protesters could not be required to socially distance and wear masks. 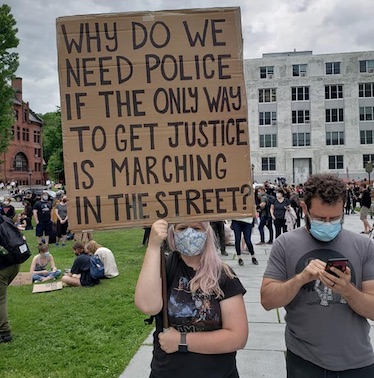 Protesters in Montpelier hold sign questioning if police are needed.

“We have an opportunity to do something better for society,” Scott said. “The alternative is to do what? Do we do mass arrests? [Require protesters to] to disperse? What we saw in Washington is an affront to what we stand for. That’s not the best way to handle things. We’re doing the best we can with the information we have in hand. We have to do two things at once. Change is needed. I believe that having these protests, to make sure their voices are heard, takes priority over that.”

Scott also said today that he has no immediate plans to terminate the state of emergency, although more and more restrictions are being removed. Gyms and restaurants are both opened for indoor use, with restrictions. Today he announced that non-contact sports competition (including soccer and baseball) may proceed, provided the number of competitors and spectators at any single event do not exceed 25 each. College and professional sports games are still prohibited.

Rodgers also said he doesn’t think H.688, the Global Warming Solutions Act, should be voted on over Zoom.

“I do not believe there has been a vote on that bill,” Rodgers said. “I have expressed to the committee that I do not believe any of these major pieces of legislation should be moving forward under a Zoom format where the public does not feel it can adequately participate. I will not be voting in favor of any of these major pieces of legislation because of that.”

9 thoughts on “Scott on not enforcing social distancing at protests: ‘How we have handled this has led to more safety’”