At Tuesday’s press conference, both Gov. Phil Scott and Health Commissioner Mark Levine urged widespread, aggressive immunization of Vermonters if and when a safe, effective vaccine becomes available. Their endorsement of mandatory vaccination would depend on likely outcomes, such as safety and effectiveness.

Vermont Daily asked: “The Virginia Commissioner of Health last week said when a Covid vaccine becomes available, he plans to make vaccination mandatory. Even though his Governor’s office has now walked that comment back a bit, Commissioner Levine, can you tell us if you will recommend mandatory vaccination, and if so why? Governor, you’ve said you lean heavily on the Commissioner’s recommendations, what are your thoughts about making Covid-19 vaccination mandatory?” 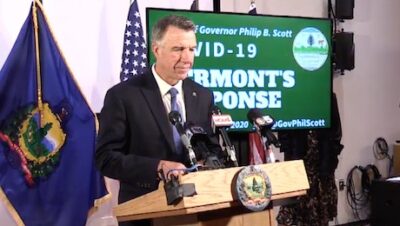 Republican Gov. Phil Scott fields questions from reporters during a media briefing on the state’s continued response to COVID-19.

Gov. Scott exercised his gubernatorial prerogative to answer first. “If we could magically go back about six months, and I could tell you we have a safe and effective vaccine to prevent the destruction of the world economy and 180,000 deaths [nationwide], I would bet that most people would say, ‘give me some of that,’” Scott said. “So from my standpoint, I lean heavily on trying to make sure that if there is [a safe, effective vaccine] that we would do so. But details do matter. There are some exceptions that would have to be made, no doubt, but the more people that take the vaccine, the better.”

When asked to characterize his answer as supporting mandatory vaccination but with exceptions, Gov. Scott demurred: “I can’t say I would want to make something mandatory” without knowing about the vaccine’s safety and effectiveness. But he repeated, “this is about our livelihood, about our loss of life.” He again cited, with emphasis, the 32,000 New Yorkers and 180,000 Americans dead from Covid-19.

Commissioner Levine answered: “I do know the commissioner from Virginia, and I have a lot of respect for him.” [Covid-19 vaccine research] “progress has been at an astounding pace. The prime consideration, if we were to make something mandatory, is what the outcomes would be like,” for example, “how many deaths that could be prevented. And we already know how contagious it is, and how much care we have to take to prevent it.”

Levine said he would want to know about a vaccine’s “safety profile. … I can tolerate any vaccine giving some discomfort at an injection site, or causing a low grade fever.” More serious side effects “usually occur very rarely,” but “you want to have a handle on that.” And the trials must have enough people enrolled, he said.

The health commissioner added, “I’m with the governor, this is a serious enough illness, and not just because it is impacting the economy and our ability to do everything the way we used to do it,” but because lives are at stake.

“I can’t give you a definitive answer just yet,” Levine concluded. “But stay tuned.”