SOUTH BURLINGTON — Vermont’s top gubernatorial candidates met last week to discuss prekindergarten education in Vermont, and the message coming from each is that pre-K is a top priority of their respective campaigns.

On Thursday at the Sheraton Hotel and Conference Center, Republican Gov. Phil Scott and Democrat challenger Christine Hallquist met at a meet-the-candidates forum hosted by Let’s Grow Kids, a campaign that exists to advance universal pre-K education in Vermont. During the event each candidate backed expanding taxpayer-funded early education. However, it appeared that some differences exist in the amount of money each is willing to commit to the expansion.

Scott said the state currently has $7 million in unanticipated online sales tax revenue that could be used for pre-K. He also specified that no new taxes would need to be raised for the program. 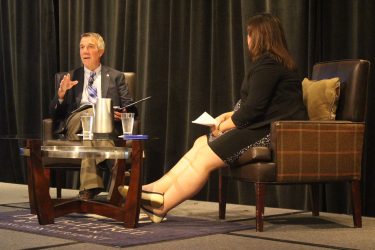 SUPPORTIVE WITHIN LIMITS: Republican Gov. Phil Scott says he’s in favor of expanding pre-K and is willing to commit $7 million for the program.

“What I am proposing is to use this revenue stream to invest more in early care learning, by increasing the appropriation to the Child Care Financial Assistance Program, which we know is very successful,” Scott said.

Other further commitments, he left the door open.

“I look forward to working with all legislators and all of you in this group in trying to do whatever we can to further this goal,” he said.

During her interview, Hallquist said universal pre-K services in Vermont would cost $206 million, and to cover all households with income at 350 percent over the federal poverty level would cost $45 million. She added that, if elected, her administration would work towards a universal program.

On where the money would come from, Hallquist said she would prioritize the expansion against other state programs. She did not specify what programs might have to be cut or disbanded to make way for early education.

“You decide which programs are your highest priorities and you fund those,” Hallquist said. “And when you do that, you may sacrifice some of your lower priorities, but this is clearly one of the more important funding goals that we have.” 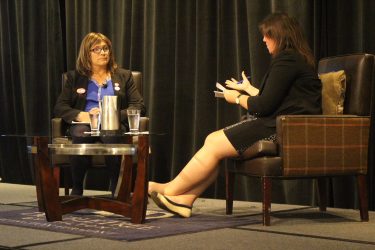 Both candidates supported the notion that children strongly benefit from these programs.

“We know the child’s brain develops immensely fast from [age] zero to 5 — there’s no question about that,” Scott said. “The sooner we can get to our kids, the better off they will be in terms of their life and their future.”

Hallquist expressed the concern that a lack of accessible child care is hard on the family, especially for women. She shared how her wife gave up a career in graphic arts to wait tables at night so that the couple could take turns watching their children, ultimately giving up their time together.

“I would say it’s somewhat unfortunate that as a woman she had to give up her career,” Hallquist said. ” … So when we talk about not having child care, I would argue that it disproportionately impacts women.”

Studies undercut the notion that early childhood education benefits children when it comes to academic performance. A 2015 Vanderbilt University study of Tennessee’s early childhood program found that the students did “worse by third grade than students who had attended elsewhere.” A 2010 Head Start Impact study found that the benefits obtained by attending the program “yielded only a few statistically significant differences in outcomes at the end of first grade.”

“We heard tonight about how this impacts women, it unlocks the workforce, it brings young people into the state, it allows us to expand our businesses,” she said toward the end of the event. “The right thing to do is to have every single child in Vermont be able to realize his or her full potential.”

Afterward Richards told True North that the program is not destined to become mandatory like conventional grade school.

“Seven out of 10 kids in Vermont alone — and it reflects the national situation — have all available parents in the workforce, whether they choose to do that or whether they must do it for their economic future. If that’s the case, where are these kids?”

She said government pre-K would not negatively affect the private sector child care industry because the program encompasses private and public centers alike.

“This program actually supports high-quality care in all settings,” she said. “The way the current system is set up, and national best practice, is called a mixed-delivery system. It can be in a school, it can be in a private center or a home. So, it can basically be public or private.”

She added, however, that strings may be attached if private sector child care centers collect this public money.

“You are governed by the same quality regulations and standards, and the money flows to you in the same way,” she said.

On the taxpayer impact, she said the dividends from improved student performance and health will pay for itself.

“That’s a lot of money for Vermont,” she said. “However, as we heard tonight, we spend $1.7 billion on education K-12 today, we spend over $6 billion in healthcare today. Major costs would be mitigated in those two systems fairly quickly if we made this investment.”

11 thoughts on “Scott and Hallquist discuss commitment to pre-K”