An Indianapolis Public Schools (IPS) administrator denies the claim that Critical Race Theory is not being taught in American schools, according to a video obtained by the Daily Caller and a monologue he posted on Twitter.

District Science Coordinator & Instructional Coach and Chalkboard Review founder Tony Kinnett said he spends time in dozens of classrooms a week and sees exactly what is being taught to kids. 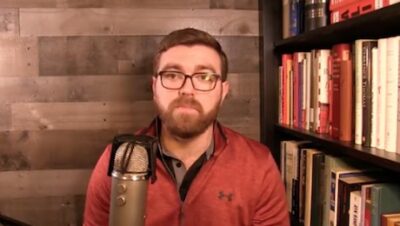 Tony Kinnett is the science coach and administrator for the largest public school district in Indiana.

CRT holds that America is fundamentally racist, yet it teaches people to view every social interaction and person in terms of race. Its adherents pursue “antiracism” through the end of merit, objective truth and the adoption of race-based policies.

On Oct. 18, the district invited Gloria Ladson-Billings, the author of multiple books including “Critical Race Theory in Education: A Scholar’s Journey” and professor of education at the University of Wisconsin-Madison, to be the keynote speaker at its district-wide professional development event.

In her lecture, she told the IPS staff that there are four pandemics happening simultaneously, the COVID-19 pandemic, the coming pandemic of economic collapse, a pandemic of environmental catastrophe and a pandemic of racism.

She recommends a “hard reset” in education because we “shouldn’t be trying to keep doing the same old things,” but instead “start afresh,” because “the point of the education reset is not to go back to normal.”

She said she hears from teachers who say “Hey I’m just teaching algebra, I don’t want to get into any of this political stuff.”

“But can I remind you that teaching is a political act, whether you acknowledge it or not,” Ladson-Billings said. “That you are working towards either more democratic practices or more authoritarian ones in some way.”

One of the three parts of her “Culturally Relevant Pedagogy,” stresses the importance of “socio-political/critical consciousness,” which for students often comes in the form of the “so what” question often raised after they learn something.

She said if she was teaching students about the War of 1812 and her students asked about its significance, she would ask “When have we seen the Capitol under attack? To which she imagines a student would respond, “Oh! You are talking about January 6?” because in both of those instances the United States Capitol was under attack.

Teachers are told to teach students differently based on their skin color and that every problem is the result of “white men” and “that everything western civilization builds is racist, capitalism as a tool of white supremacy,” Kinnett said in his video. He claims that all of those points are straight out of CRT theorist Kimberle Crenshaw’s “Critical Race Theory: The Key Writings That Formed the Movement” book.

As an admin for the largest school district in Indiana, here's what we mean when we tell you that we aren't "teaching" Critical Race Theory: pic.twitter.com/f6RLghcw2R

These ideas can be found in multiple subjects including math, history, science, English and the arts, but the district “told principals at the beginning of the year that if a parent asked if you’re teaching Critical Race Theory in your school, you tell them no,” Kinnett told the Daily Caller News Foundation.

“When schools tell you we aren’t teaching Critical Race Theory means one thing, ‘go away and look into out affairs no further,’” Kinnett said in the video. “It isn’t about transparency, it isn’t about cultural relevance, it’s race essentialism, painted to look like the district care about students of color.”

Kinnett said he had noticed instances of CRT weaved into the district’s curricula in the past, but ignored it because he worked there and didn’t want to lose his job.

“But the lying to parents and forcing your staff to lie to parents, I don’t go for that,” Kinnett told the DCNF. “So [I] honestly just decided, you know what, parents need to know more about what’s going on in Indianapolis, more than I enjoy the comfort of a salaried position”

“It was just kind of like something snapped,” Kinnett said regarding his decision to post the video, knowing it could cost him his job.

Kinnett is currently on non-disciplinary leave with pay, over expressed concerns for his safety due to “disturbances” from coworkers. He said he doesn’t know how the district won’t fire him, because he definitely violated his contract without a doubt.

“But I knew that going in… It’s worth it because if there’s a parent who was lied to this year, and so they left their kid at IPS, now they know what’s going on and they can take their kid out and they can put them in a school that the parent chooses.”

If a parent supports teaching CRT, then they can choose to keep their child in the IPS system, but either way the parents should know all of the facts, Kinnett said.

IPS did not immediately respond to the DCNF’s request for comment.