Senator Bernie Sanders has made it quite clear he despises President Donald Trump and all that he stands for. Nevertheless, the senator and his family have emulated the Trumps in so many ways that it has to be disheartening to his legion of followers.

When the Sanderses undertake a project, it is critical that those who will be chosen to be involved must first be family members. A recent example: the Sanders Institute, headed up by Jane O’Meara Sanders, has a son as a paid employee. And ditto for the Sanderses’ other nonprofit, Our Revolution. 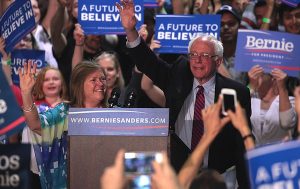 U.S. Senator Bernie Sanders and his wife, Jane Sanders, speaking with supporters at the Agriculture Center at the Arizona State Fairgrounds in Phoenix, Arizona. (Photo by Gage Skidmore)

Ms. Sanders also kept things in the family when she was president of Burlington College. She made sure that her daughter’s nonprofit venture, Vermont Woodworking School in Fairfax, Vermont, was the recipient of close to $500,000 in funding from the now defunct college.

And not unlike the Trumps, Ms. Sanders does not mention anything negative in the promotion of The Sanders Institute. She notes her involvement with the Mayor’s Youth Office, in Burlington. Very little is mentioned on what had transpired at Burlington College, where she was president for seven years.

Bernie must have read Trump’s “The Art of the Deal” before he entered into negotiations for his book advance with the executives at St. Martin’s Press. Who would ever have thought it would be possible for a U.S. senator from the small state of Vermont to obtain an advance of $795,000? You just have to be so proud of him.

Following in the footsteps of their fellow New Yorker, Donald Trump, the Sanderses are well on their way to amassing significant real estate holdings now that their lake house has been added to their collection. Granted, they have a long way to go to catch up with the Trumps; nevertheless, they have made a good start.

Getting back to Burlington College, a great deal of credit has to be given to Ms. Sanders and her negotiating skills. She was able to obtain a “sweetheart” deal when her services were no longer wanted by the college’s board of trustees. Ms. Sanders walked away with a $200,000-plus severance package. Even the FBI and FDIC now investigating the college’s finances must be puzzling over the payout.

However, the most remarkable replication of a Trump-type business venture was the creation of the company, location and players that ran the marketing for Bernie’s run for president. There is no doubt that this venture had all the ingredients of a Trump enterprise.

Who actually owns the enterprise to this day is still an unknown. Old Towne Media LLC was where close to $90 million dollars had been legally funneled by the Sanders to the presidential campaign. The company was located in a nondescript house located at 4507 Penwood Drive in Alexandria, Virginia.

In keeping with the Trump mantra of “all in the family,” the house is the home of Shelli Hutton-Hartig, who along with another close friend of the Sanderses, Barbara Abar Bougie, controlled the spending for the campaign’s marketing. In doing so they would have been able to keep in the LLC approximately 17 percent, which is a standard fee for any marketing and advertising firm to charge — in this case it would amount to $15.3 million. The Donald would have to be pleased with their entrepreneurial prowess.

I can only imagine how much more successful Bernie Sanders and associates might have been had they gone into business rather than public service. Their profound business skills have been evident, starting out 40 years ago in Burlington, Vermont, as an itinerant carpenter, and now a member of the country’s “one-percenters.”

Make no mistake: the Sanders saga is a Vermont success story, and in many ways surpasses Donald Trump’s achievements. Trump inherited his family’s real estate empire, whereas Sanders grew his through public service — and in doing so has kept it all in the family.

10 thoughts on “Keelan: The Sanderses are just like the Trumps”