The Senate on Wednesday overwhelmingly approved the VA Mission Act by a 92-5 vote following easy passage last week in the U.S. House.

President Donald Trump is expected to sign the bill in what is certain to be viewed as one of his top legislative achievements.

Sanders opposed the bill in part because it allows vets to get care from private doctors and hospitals as part of a trend toward privatizing the VA system.

“I am concerned, however, that despite some very good provisions in this bill, it continues a trend toward the slow, steady privatization of the VA,” he said in a statement.

The occasion of the bill has been long wait times at VA hospitals that have led to the untimely deaths of vets needing immediate attention.

“The way to reduce wait times is to make sure that the VA is able to fill the more than 30,000 vacancies it currently has,” Sanders said. “This bill provides $5 billion for the Choice program. It provides nothing to fill the vacancies at the VA.”

Sanders nevertheless praised parts of the bill, including expanding the Caregivers program to veterans of all generations. He also said he supports raising the limits on the Education Debt Reduction Program, which Sanders helped lead.

The embattled VA is still overshadowed by the 2014 scandal in which hospitals were exposed for manipulating wait-time data. The goal for VA appointments was 14 days from a call for service, but much longer wait times were leading to unnecessary deaths.

Amid the fallout was the creation of the Department of Veterans Affairs’ Choice program, which is being extended an extra year under the VA Mission Act. 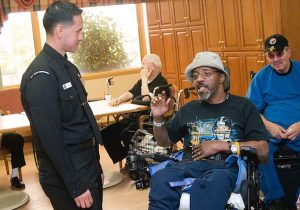 VA SCANDAL: The Veterans Affairs hospital in Phoenix, Ariz., was awarded a 1 out of 5 rating at the end of 2016, three years after dozens of veterans died there waiting for care.

The bill also includes a call to review the VA’s old infrastructure. Last year, former Department of Veterans Affairs Secretary Anthony Principi warned lawmakers that without upgrading its aging infrastructure the program was heading towards failure.

“I don’t think this can be sustained for another 10 to 15 years,” Principi said.

While Sanders joined a small minority of lawmakers to vote against necessary care, many veteran organizations back the legislation. The American Legion, which has 2.4 million members across the nation, has expressed support for the bill.

“This is quite an accomplishment and we’re very proud of it,” Louis Celli, American Legion executive director of Government and Veterans Affairs, said. “And that’s why 38 VSOs signed letters to support this legislation.”

Sen. Johnny Isakson, R-Ga., is the current chair of the Senate’s veterans panel. He said the bill will “make them contemporary with the 21st century and see to it that the best care, the best attention, and the best legislation is in place.”

This is not the first time Sanders has stepped out on a limb for support of the status quo with VA services. Not long after the 2014 scandal, he gave a number of public statements that appeared to be in defense of the failing system.

Nonetheless, Sanders has always maintained that he’s for the best services possible for veterans.

“I have long believed the cost of war must include the cost of caring for the warrior,” he wrote on his web site. “That is why one of my very highest priorities in Congress is ensuring our nation’s veterans have access to the quality health care and benefits they have earned and were promised.”