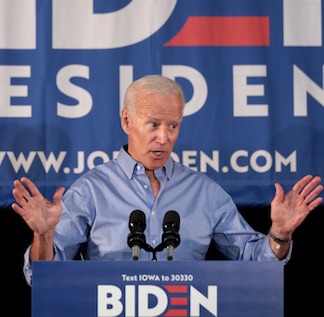 Former Vice President of the United States Joe Biden speaking with supporters at a community event earlier this year in Iowa.

In Illinois, with 37 percent of precincts counted, Biden held an insurmountable lead of 58.5 percent to 36.7 percent

Voters in Arizona also held primaries Tuesday that will help decide who will be the Democratic presidential nominee to take on President Donald Trump in November.

Ohioans also were scheduled to vote Tuesday before the administration of Gov. Mike DeWine ordered a postponement due to the ongoing health concerns over the novel coronavirus. Ohio’s primary now will be held June 2.

A coalition of civil rights groups asked a federal judge to extend Florida’s mail-in ballot deadline for Tuesday’s presidential primaries through next Tuesday and postpone the count until March 27, also due to concerns over the coronavirus. U.S. District Judge Robert L. Hinkle, however, ruled it was too late.

Heading into Tuesday’s primaries, Biden secured 898 delegates to Sanders’ 745. The eventual nominee will need 1,991 to win at the Democratic National Convention this July in Milwaukee.

In Florida, 219 delegates will be awarded depending on final vote counts.

In all three states, 349 delegates are at stake.

One thought on “Sanders on the ropes: Biden scores massive wins in Florida, Illinois”