U.S. Senate candidate in Vermont and incumbent Independent Sen. Bernie Sanders chatted about a possible 2020 presidential run at a Monday forum, in which he wouldn’t say whether he’d commit to fulfilling a six-year term if re-elected, because it’s “impossible to be a senator and a president at the same time.” 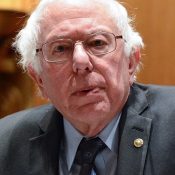 Sanders, who ran unsuccessfully for president in 2016, said at a Senate debate Monday night in Winooski, Vermont, that he’s not definitely throwing in another bid, but also wouldn’t say if he’s planning to completely serve another term.

“Right now, my focus is on the year 2018, but if you’re asking me to make an absolute pledge as to whether I’ll be running for president or not, I’m not going to make that pledge,” Sanders said, according to local Vermont newspaper Seven Days.

“The simple truth is I have not made that decision. But I’m not going to sit here and tell you that I may not run. I may. But on the other hand, I may not,” the senator said.

Among the chatter of potential 2020 Democratic presidential candidates, Sanders currently leads the field of contenders in terms of media attention and headlines, according to a Politico report that measured the amount of representation and attention figures are receiving.

Sanders holds a 17 percent share of the news coverage, appearing in 114,000 articles over the past three months, according to Politico’s analysis. The next potential candidate is former Vice President Joe Biden, who holds a 12 percent share.

Asked again at the forum whether he’d commit to serving out a third term if elected, Sanders said not if he’s president.

“If I’m elected president of the United States? Mmm. Probably impossible to be a senator and a president at the same time,” Sanders responded. “So the answer to that is probably no. But I haven’t made that decision as to whether I’ll run.”

A CNN poll from Oct. 14 showed the progressive Vermont senator in second place behind Biden in a matchup against President Donald Trump.

Sanders responded when pressed at Monday’s debate about missing 115 of 163 roll call votes in the Senate while he was running for president in 2016.

In the CNN poll, behind Biden and Sanders, in order, were Democratic Sens. Kamala Harris of California, Elizabeth Warren of Massachusetts and Cory Booker of New Jersey, and former Secretary of State John Kerry.