Leading Democratic presidential candidates Bernie Sanders, Joe Biden and Michael Bloomberg have paid a combined $466,000 to superdelegates that are likely to support their benefactors in the event of a contested convention, Federal Election Commission records show.

Sanders has spent the most so far on employing superdelegates, FEC records show. His campaign co-chair, former Ohio state senator and Democratic National Committee member Nina Turner, has received $149,000 from the democratic socialist’s campaign. The Vermont senator has also divvied out $53,000 to his California political director, DNC member Susie Shannon.

Turner and Shannon are superdelegates by virtue of being members of the DNC. The two surrogates would be able to cast ballots for their boss if a second round of voting is required at the Democratic National Convention in July, which would be triggered if no candidate wins at least 50% of the delegates during the primaries and caucuses. 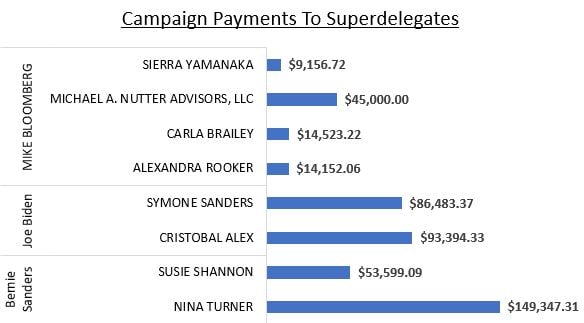 Biden, the former vice president, is just behind Sanders in superdelegate spending, disbursing a combined $180,000 to DNC members Symone Sanders and Cristobal Alex, according to FEC records.

Some of Bloomberg’s highest-ranking staffers are superdelegates. FEC records show that a consulting firm run by former Philadelphia mayor and current DNC member Michael Nutter has already received $45,000 from Bloomberg’s campaign since December when Nutter signed on to be the former New York mayor’s national chairman.

The Sanders, Biden and Bloomberg campaigns did not return requests for comment.

Superdelegates could play a major role in determining who becomes the Democratic nominee in July’s convention if no candidate receives over 50% of the primary and caucus delegates, the likelihood of which has increased substantially since Biden’s victory in South Carolina on Saturday.

FiveThirtyEight’s forecasting model showed Monday that there’s a 67% chance of a contested convention, up 17 points from before the South Carolina primary.

The Democratic presidential candidates still in the race seem to be bracing for a contested convention. Sanders was the only candidate during a Feb. 19 debate to say the person that enters the convention with the most, but not over 50%, of the primary and caucus delegates should be the Democratic nominee.

But Massachusetts Sen. Elizabeth Warren, who is sitting in fourth place in the Real Clear Politics national polling average, believes she has a pathway to victory in the event of a contested convention and has no intention of dropping out, Politico reported.

2 thoughts on “Sanders, Biden, Bloomberg have paid combined $466,000 to superdelegates”