This article by Bruce Parker originally published June 11, 2015, on Watchdog.org. This is part 8 of the Drivers Licenses for Illegals Series.

Licenses are de facto citizenship for undocumented immigrants, the nation’s top ID card and essential to just about every service. Ongoing fraud related to Vermont licenses has many concerned that a weaker standard could make the state an entry point for terrorists seeking a formal ID card.

In May, top officials at the Vermont Department of Motor Vehicles confirmed that foreign-language ads placed in New York area newspapers advertised help for illegals seeking a driver’s license.

While officials didn’t discuss specific cases tied to the ads, emails Watchdog obtained under Vermont’s public records law show fraud cases under investigation as recently as April are directly linked to the ad.

On March 19, investigators from the DMV Enforcement and Safety Division learned that Ukrainian and Georgian illegal immigrants were staying in a Bennington apartment while applying for driver’s privilege cards at the local DMV.

DMV counter staff grew suspicious when two men arrived at the same time for their written tests and listed the same apartment on their applications. During the exams, one of the applicants was caught using his cell phone, presumably for cheating, and was forced to reschedule. The man complained the cancellation cost him $200. 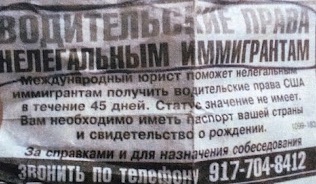 EFFECTIVE AD: According to this Russian-language newspaper advertisement traced to the New York City area, an international lawyer can help illegal immigrants obtain drivers licenses in the U.S. in 45 days.

After the immigrants made multiple visits to the branch, DMV staff cancelled an April 7 road test for one of the men after he admitted paying money to use the Bennington apartment. The man ultimately admitted he lived in Brooklyn and worked construction in New York City. Both immigrants appear to have paid a middleman about $1,000 for help obtaining the driver’s privilege cards.

When investigators told the men they were likely being taken advantage of and faced potential arrest and contact from U.S. Immigration & Customs Enforcement for submitting false information, they agreed to cooperate with investigators.

The foreign nationals, whose names are redacted in public documents, said they traveled to Vermont after responding to a phone number listed on a Russian ad. In English, the ad reads, “Drivers licenses for illegal immigrants! International lawyer can help illegal immigrants obtain drivers licenses in the U.S. in 45 days. Your status does not matter. You need only a passport from your country and a birth certificate. For inquiries, or to set up an appointment, call this number: 917-704-8412”

Upon seeing the ad, the immigrants met with a New Jersey man who instructed them to drive to a Bennington apartment rented in his name, and to gather mail that would be sent to them at the address. They would use the mail as proof of Bennington, Vermont, residency during the application process.

One man admitted staying overnight at the apartment on about 10 occasions, mostly to get mail and to take tests at the local DMV branch. The men were to leave the apartment key for others after them. Investigators confirmed the foreign nationals were not the lessees of the Bennington apartment and did not know the property manager.

During their time in Vermont, the men drove semi-trailer trucks, minus the trailers, raising additional concerns. Nearby residents said the men parked the rigs behind the Bennington apartment.

Status of the foreign nationals

According to the public documents, investigators verified the identities and national origin of the men from a passport, a U.S. visa, and a Social Security card marked as valid only for work with authorization from the Department of Homeland Security.

Upon checking names against federal immigration databases, it is believed one of the applicants flew into Juarez, Mexico, in 2011 and entered the United States illegally by crossing the southern border. The other applicant entered the country as student in 2008, but never enrolled. Neither had legal presence in the United States.

As for the use of semi-trailer trucks, it is unclear if the men possessed commercial driver’s licenses, which illegal immigrants may not obtain lawfully in any state.

According to the property manager of the Bennington apartment, the tenant on file, a U.S. citizen, began renting the space in October 2014. The tenant, who does not live at the address, told the property manager frequent visitors to the apartment are employees — a claim the Ukrainian and Georgian illegals contradict based on their version of events.

In meetings with the property manager, investigators learned the lessee is president of an out-of-state used auto sales firm. Investigators soon connected the man with multiple auto businesses, and also to a transport and logistics firm. The U.S Department of Homeland Security has examined the man in the past.

As of April, at least nine different people were receiving mail at the apartment. When the tenant requested that the property manager list six occupants listed on the mailbox, the manager refused. Investigators said they expected many new license applicants due to such arrangements.

Despite the apartment’s revolving occupancy, investigators may have found one semi-regular occupant at the address. That person, a naturalized citizen as of 2012, also may be tied in with immigration fraud. In November, Border Patrol at Newport, Vermont, apprehended the man during an attempted smuggling incident. He was not prosecuted by the U.S. Attorneys Office, however.

Investigators believe they have enough evidence to prove the two foreign nationals are not Vermont residents. As of mid-April, investigators had not met with the other people targeted to receive mail at the Bennington apartment. It’s unclear what contact, if any, state and federal investigators have with the tenant.

On Wednesday, Watchdog.org reached out to Sue Minter, secretary of the Agency of Transportation, for comment about specific cases related to the foreign-language ad. She did not return our request for an interview.

DMV Commissioner Robert Ide told Watchdog he was not aware of cases tied to the Russian-language ad.

“I don’t know of any specific cases. It all goes into the anecdotal pile for us,” he said. “I have absolutely no new information, other than we’re putting our fraud investigations in other areas because we’ve seen a gross diminishment of activity.”

As of May, DMV investigators confirmed 231 fraud cases. The number is up from 103 cases in February. Officials say they are not seeking prosecutions or deportations related to fraud activity by illegals.