WDEV’s morning host, Dave Gram, likes taxes and doesn’t like it when people refuse to call a tax a tax, which, he feels, demeans taxes. This led to a clarifying exchange between himself and Rep. John Killacky, D-South Burlington, on Dec. 31 over the Transportation Climate Initiative (TCI), which is nothing more than a regional carbon tax on motor fuels. Here are the transcript highlights:

JK. The other big dance [in the upcoming legislative session] is going to be this regional pact, the Climate Initiative. 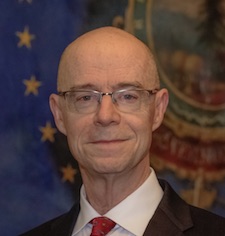 JK. The governor has now put out a draft MOU to have Vermont join with eleven other states and the District of Columbia to do a cap and trade on carbon emissions. It’s a really interesting idea. Some people are calling it a carbon tax. I don’t think of it as a carbon tax. It’s a regional thing, and what happens is the money that is going to be taken out of this will be invested back into green energy and a green economy here in Vermont. And, if these other states do it surrounding us and Vermont doesn’t do it, the money will be invested in Maine and New Hampshire [Note: NH has already pulled out of the program.] and different places, so, it seems to me– but to get twelve states to agree is going to be interesting and to get our state – I think the legislature and the Democrats seem see the validity and the importance of this. The governor – he put out the draft, so I think he’s testing the waters on this.

DG. I’m going to give you a little push back on this tax thing. I’ll tell ya. I’m somebody who likes to keep language as clear and simple and direct as possible. That’s what I’ve always pushed for in my work as a reporter and also these days on the radio. I like to call things what they are. … I think shying away from that word sort of leaves a lot of voters with the impression that you’re trying to dodge something. I’m saying, if it is a tax, if we need to have a tax. … Why can’t we call things what they are?

JK. Well, you know Dave, I don’t mind calling it a tax. I think the distinction I hear, and maybe it doesn’t change that in your framework it could be a tax, is that it’s invested back into the state. That this money isn’t just –

JK. Okay, then, I don’t disagree with you.

DG. When people hear people say, uh, it’s not a tax, it’s a fee or some other magical formula where, yes, you’re going to pay more money but we’re going to get all these benefits. I thought that’s what other taxes are.

Yes, that is what all taxes are, and TCI is a tax. A $20 million to $90 million carbon tax (between 5 cents and 17 cents per gallon) on Vermont drivers.

Proponents of TCI, like Rep. Killacky and many others, have been traveling the state in advance of the legislative session to peddle the notion that TCI is not a tax because the money raised will be “invested” in government programs, with the full expectation that we dumb citizens will actually buy it. This is perhaps one of most absurd and disingenuous arguments ever put forward by elected officials (which is saying something), and Gram demonstrates just how easy it is to blow this argument out of the water. Thanks for that.

Images courtesy of Wikimedia Commons/John Ramspott and state of Vermont

6 thoughts on “Roper: Radio host gets legislator to admit TCI is a tax”