Since the passage of Act 64, Vermont’s Clean Water Act of 2015, farmers, road crews and utilities have faced extra regulatory challenges in preventing pollution from getting into nearby waterways.

WATER RUNOFF: Road crews increasingly are being called upon to monitor water runoff that might make its way into Lake Champlain.

So far, much of the focus has been on farms, which account for 40 percent of all the phosphorus that runs into Lake Champlain. But agriculture is not the only sector facing a high-cost burden.

On Tuesday, about 90 municipal leaders from around the state attended a meeting hosted by the Agency of Transportation to discuss the mitigation of water runoff from dirt roads. The state estimates that about 6 percent of the Lake Champlain phosphorus comes from this source.

Traditionally, road crews have only had to concern themselves with getting water to drain properly from roads. But now they must think of pollution, too.

“The issue is always drainage — what you need to do is get the water off the road,” said Karen Horn, director of public policy and advocacy at the Vermont League of Cities and Towns. “That’s always been the case. It infiltrates, it freezes, it cracks pavement, it ruins roads.”

Now the issue is, where does the water go from there?

“You need to look at all the areas that need improvement to reduce that water flow, and then you are going to need to implement those projects. It is going to run into the many millions of dollars for municipalities to comply with this,” Horn said. 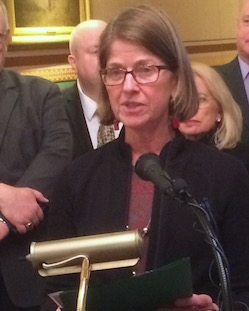 Karen Horn, director of public policy and advocacy at the Vermont League of Cities and Towns

She says that while some grant money is available to help, so far it’s not enough. The state’s $2.2 million Transportation Alternatives Program, originally intended for sidewalks, bike paths and other non-automobile infrastructure, is now going to mitigate water runoff from dirt roads.

“[The transportation department] said they are getting about twice as many applications as they are able to fund, so that’s just kind of an indication of how the demand is,” Horn said. “It’s a significant issue, and it’s a huge amount of work that municipalities are going to need to do over the course of the next 20 years.”

In addition to dirt roads and farms, parking lots and roofs account for 14 percent of Lake Champlain phosphorus; erosion of river banks and streams account for another 22 percent. Horn said there are several other water sources being looked at to set additional water quality standards.

The proposal did not recommend a revenue source, which prompted state Sen. Chris Bray, D-Addison, to draft a new bill to address this matter.

“I have a bill in to create a clean water utility,” Bray told True North Reports. “And it says to use the public utility commission, to give them a budget and to let them set the rates.”

The rates would include a fee-per-parcel system that contributes to cleaning up roads, farms and other phosphorus-contributing land uses. The payments would be in tiers based on the amount of pollution produced.

“The base fee is, clean water is essential to everyone and we should all invest in it,” he said. “But the surcharge is really if you are causing pollution and damage to water in the state, which we all own together, then you ought to be paying to help clean that problem up.”

While road crews struggle with managing their share of the Lake Champlain clean-up effort, the agriculture sector’s burden is enormous. The Vermont Agency of Agriculture, Food and Markets recently started taking request-for-proposals for a $1 million grant via the Agriculture Clean Water Initiative Program (Ag-CWIP).

“VAAFM’s Ag-CWIP will provide new opportunities for farmers and partner organizations to undertake projects that will achieve reductions in nutrient runoff from agricultural lands, with a focus on projects which reduce phosphorus losses in priority watersheds,” a Nov. 21 news release from the agency states.

Farmers have their own criticisms about the regulatory burdens placed on them by the state. Vermont Dairy Producers Alliance board member Margaret Gladestone expressed such to the Senate Committee on Economic Development last year:

We’re in the Connecticut River Valley and they [the state] are mapping out frequently flooded fields,” she told Watchdog.org. “Some of the maps are saying we cannot farm certain sections of these fields, yet we have been there for 28 years and the field has never flooded. They are basing it on soils that appear to be in that [flood-prone] category. That has a huge impact on us.