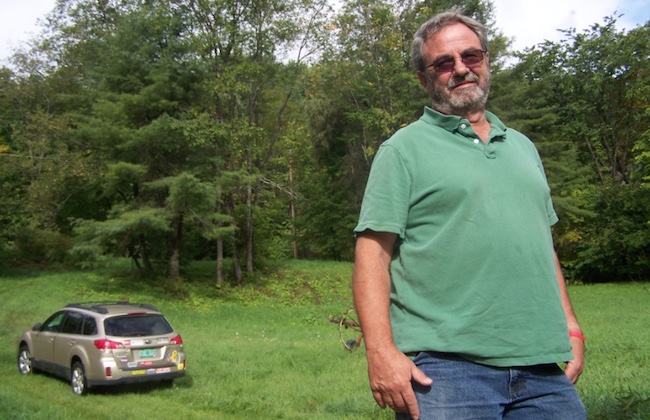 A realtor and former selectman from Sharon, Vt., Kevin Blakeman believes that the state has over-reached its authority when it comes to what he can — and can’t — do when it comes to developing private property situated along Fay Brook near the White River. (Photo by Lou Varricchio/TNR)

SHARON, Vt. — Kevin Blakeman has enjoyed his 60-acre homestead along bucolic Fay Brook in Windsor County for more than 40 years, but since his town adopted river corridor regulations, he’s not so sure how much of his property is truly his own.

The area received the brunt of Tropical Storm Irene in August 2011, and while residents have gotten on with their lives the memory of the impact of the weather event lingers.

But Blakeman is worried for an entirely different reason. Since the town embraced the state’s restrictive Sharon Flood Hazard Area bylaw and River Corridor Regulations, his developable land appears to have shrunk.

With retirement on the horizon, the realtor and former selectman would like to be able to develop a 15-acre portion of his property, but the town says he can’t because Fay Brook may flood some day, causing erosion around his property or properties downstream.

Blakeman told True North he believes the river corridor rules are draconian and un-American, and that the flood hazard maps have been arbitrarily drawn.

“I don’t want to come across as a nut case, but I’m a big proponent of property rights. When you own something you have some rights, right?” he said. “When the town of Sharon passed the river corridor regulations it sounded wonderful, yet it didn’t go as well as you think it might. It’s just not practical.”

The Vermont Rivers Program, managed by the Agency of Natural Resources Department of Environmental Conservation, uses statewide mapping to delineate “river corridors” that must remain free of concrete fixtures that constrain and direct rivers away from houses and buildings. Such attempts to direct and straighten river channels, while useful under normal weather conditions, are viewed as flood hazards when major storms hit.

So far, about 70 percent of towns have rejected the regulations. However, Blakeman says Sharon’s ordinance prohibits building new development where you have to cross a “fluvial hazard,” such as a place where you must cross a brook to get to the property.

“Since nearly every road in town is named after a brook, there’s an awful lot of property that’s on the backside [of streams] — it’s unfortunate,” he said. “I am not calling attention to this concern just for myself; there are a lot of Sharon landowners who aren’t even aware of these new regulations.”

The Agency of Natural Resources would like to see more communities like Sharon adopt the regulations in the post-Irene environment.

Officially, ANR states “if river corridors are not protected at the community level, the state will bear an ever-increasing burden … in terms of flood disasters and the human misery they cause when there are less and less places on the landscape where streams can expend the flows and erosive energy of a flood.”

Other Sharon residents are unhappy with the regulations.

At the Aug. 21 Selectboard meeting in Sharon, resident Walter Radicioni stood up to object to a letter that he received from Sharon’s new flood hazard administrator, Geo Honigford.

According to the minutes from the meeting, Radicioni was in the midst of rebuilding a barn on his land when Honigford dropped by to inspect the site. Radicioni says he was shocked when the administrator told him that he needed a flood hazard permit before he could proceed.

Not wanting to lose the money he put into the rebuilding project, Radicioni quickly submitted the required application. In a few weeks, he received bad news: his permit was denied, leaving his barn rebuilding work in limbo.

The minutes state: “Mr. Radicioni described the events that led to demolition of the barn and further stated he has all kinds of documentation about when the barn was taken down. Selectmen encouraged Mr. Radicioni to follow the process of appeal outlined in the letter and to submit all his evidence to the Development Review Board.”

Roadside marker along the White River showing the high-water mark of Tropical Storm Irene from 2011. (Photo by Lou Varricchio/TNR)

True North contacted Honigford, but he declined to comment beyond saying he was “too new” to the job to provide a clear picture on what landowners felt about the ordinance.

Honigford, the owner of Hurricane Flats Farm, an organic produce operation in nearby South Royalton, erected a roadside marker showing the high-water mark of Tropical Storm Irene in 2011 — a reminder of the flood hazards along the White River.

Blakeman said that if he applies for a permit to build along Fay Brook he will likely be declined. He added that state officials haven’t been willing to get involved.

“I have tried meeting with Gov. Phil Scott’s office staff,” he said. “State Rep. David Ainsworth did arrange a personal meeting with Director of Policy Development and Legislative Affairs Kendal Smith, but that lasted about five minutes. She said that she would have Julie Moore, the new secretary of Agency of Natural Resources, call me — but that was the end of that.”

Ainsworth, a Republican serving his first term on the House Committee on Natural Resources, Fish and Wildlife, told True North he has serious concerns regarding the ordinance. He also confirmed that Blakeman has been in touch with him and has helped expose concerns following Sharon’s adoption of the ordinance.

“I am going to pursue this [issue] a little bit more,” Ainsworth said. “I live in Royalton, and land below me along Vermont Route 14 on the White River, which is 14 feet above the highway, is designated as a no-development zone; nothing can be put on it. Yet houses along Route 14 are exempt. It seems arbitrary to me. I feel this isn’t the way laws should be.”

He added that he’s seen a shift at ANR so that “there’s more attention (in waterways) than in agriculture, which is economically more significant to the state.”

Peggy Ainsworth, the state legislator’s wife, serves on the Selectboard in neighboring Royalton. She said her board turned down the river corridor ordinance several years ago.

“Our selectboard rejected it,” she said. “It came down to the fact that the ordinance encompassed a lot of property that the board didn’t think necessary. In looking at the map, there were certain areas in the [flood] danger zone that, in practicality, weren’t in a danger zone.”

Meanwhile, Blakeman said he wants to educate others about what he sees as a government trend toward “Big Brotherism.”

“This regulation was passed on the sly, and most property owners in my town don’t even know it happened,” he said. “It’s time that someone shine a light on what amounts to a government taking of private property.”